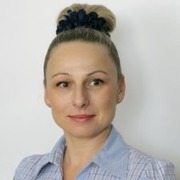 Aksana Hancharuk graduated with Master’s degree in Nursing Science from Medical University, Grodno, Belarus in 1999. She became interested in Integrative Medicine early in her education. Working in medical field she began asking questions about health and healing that conventional medicine was unable to answer. She began seeking out like-minded health practitioners and started studying Functional Medicine, Massage therapy, Acupressure massage and Acupuncture therapy. She graduated as Therapeutic Massage Therapist and the next couple of years worked as manual therapist in outpatient, inpatient, and private practice settings. There she used soft tissue, myofascial, and other methods of bodywork in combination with exercise and stretching programs to help patients recover from injuries, surgery and chronic pain. Especially well Aksana mastered helping people with psychological, mental and emotional disorders such as depression, stress, anxiety, panic attacks, loneliness and sadness.

During this time, she had a strong urge to help people heal their pain and health issues, using her knowledge. Practising she discovered ability to sense patients health issue and relieve pain or discomfort. People reported improvement in their conditions right after the session. Willingness to help as many people as possible encouraged her to learn and explore multiple aspects of the living science, spirituality and different healing modalities. She became passionate about well-being and personal development, started practising yoga and meditation, became a vegetarian. Aksana travelled the world for many years, searching for natural wisdom, healers, shamans, gurus. She was searching for the answers, learning about nutrition and healthy living, eating and experiencing all that firsthand. She was practising and learning Yoga. In 2001 she took her first 200 hours Shri Yoga teacher training in Bad-Antagonist, Germany, and started teaching right away. In 2003, Aksana received initiation in Living School of Spirituality called Sant Mat, also known as The Path of the Masters, Surat Shabd Yoga: Meditation on the Inner Light and Sound of God. Since that time meditation made her life a real spiritual journey.

Aksana absorbed the most important aspects from different teachings and created her own system to maximise the effect of healing for her clients. However, she felt she was missing something bigger.

After immigrating to United States in 2004, she transferred her Bachelor degree in nursing, started working as registered nurse in Home health care company taking care of elderly people. At the same time she continued teaching yoga and practising meditation. Her holistic approach to disease made her look for non-traditional ways to improve her patients’ health. Working with elderly clients through their deaths, disease and injuries, Aksana felt a special attachment to her clientele. Feeling deeply related to her patients, she took their problems as her own and constantly shared her energy with them. Dealing with all of her patients’ issues, depleted Aksana’s energy. She started feeling empty, emotionally drained and depressed. These challenges and stress were making Aksana search for something more, like a bigger energy source.

In 2009, Aksana was first exposed to Mahendra Kumar Trivedi’s biofield Energy healing treatment. This was the moment when she realised she found what she was looking for her entire life. The effect was something she never experienced before. Right after one energy transmission session she felt relieved, refreshed, energised, happy and completely stress free. She couldn’t believe that one session could be so life changing. She knew right there and then that this is something she couldn’t live without. Instantly she became a true follower of Mahendra Trivedi’s teachings and The Trivedi Effect organisation. She knew that her spirituality took a huge leap forward.

At this time she learned a lot about her new Master. She discovered that he participated in thousands of scientific studies in many aspects of life. She found out that he was the only Master in the world who participated in variety of scientific researches and produced dramatic results with his ability to transmit Divine high frequency energies.

Having discovered the Trivedi phenomenon, Aksana started intense studies of these divine energies with Mahendra Trivedi in his prestigious Master Healer Program. Up until now, she continues to explore these energies understanding their unlimited potential.

However, Aksana was not the only one who felt the amazing power of the energy transmissions. Many others did too. She was very lucky to be one of the first followers of Master Trivedi when he just arrived to US. Not only it gave her a benefit of meeting the master and experiencing the effects early on as well as she could see how quickly the number of the followers grew over the years. She also watched many people joining Guruji Mahendra Trivedi and enjoying wonderful results of the divine energies.

In 2015, Trivedi Organization started big science research project with the group of 18 participants: Aileen Carol Lee, Aksana Hancharuk, Carola Marina Sand, Debra Jane Schnitzer, Dr. Rudina Thanasi, Eileen Mary Meagher, Faith Ann Pyka, Gary Richard Gerber, Johanna Catharina Stromsnas, Judith Marian Shapiro, Laura Nelson Streicher, Lorraine Marie Hachfeld, Matthew Charles Hornung, Patricia M. Rove, Sally Jean Henderson, Sheila Maureen Benson, Shirley Theresa Holmlund and Stephan P. Salters. They transmitted the biofield energy for 5 minutes to mice, minerals and a herb. The minerals included Zinc, Magnesium, Selenium and the herb was Ashwagandha. The energy was transmitted from the participant’s home in USA to the scientific laboratory in India. This scientific lab (which was around for 200 years) had 60 scientists deployed and devoted just to this study. This was once in a life time experiment for them. The miraculous results of this research have been documented. All participants of this Trivedi Healers group demonstrated the ability to harness Divine energy and transmit it to the living and non-living substances. Everyone’s abilities have been scientifically tested, measured, documented and published in international peer-reviewed science journals.

This was not just a random group of people taking part in this research. All the participants were carefully selected by Guruji himself. They completed the Healers Mastery Program under the guidance of Mahendra Trivedi, Mrs. Alice Branton, Gopal Nayak and Dahryn Trivedi. These people developed a deep connection to the Universal Intelligence / God of their understanding. They were able to harness the universal life force for the benefit of themselves and others in their life. Everyone was very excited and determined to make a history and be part of the research that never happened before in human history. Much to their excitement, the results of the research turned out to be as successful as the participants and Guruji himself hoped they would be.

The master healers group was delighted to learn that they mastered the connection with God of their understanding. They were very happy to find out that they know how to stay connected and make a positive impact on living and non-living organisms and that the distance doesn’t really matter for a true healer.

The group also connected with each other and everyone proved to be as effective alone as well as part of the group. It all became clear that what really mattered was the presence of the Divine connection. In its presence, everything and anything was possible.

Aksana is now confident that Mahendra Kumar Trivedi is a natural phenomenon that can impact individuals that would like to improve their lives as well as people that want to become true masters of transmitting the Divine energies.

Aksana is very grateful that she met Mr. Trivedi and became a part of the Trivedi organisation.

She believes that the abilities of the Master Trivedi organisation and Mr. Trivedi himself are so limitless and she wants to be part of the future that this organisation will create. Now Trivedi Healer Aksana believes that with this powerful gift from true Master she can help change the lives of many people just like Mr. Trivedi changed hers.