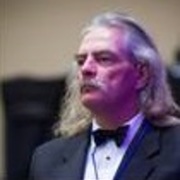 Barry Wellborn grew up in San Diego, attending high school and learning the automotive trade, he was always interested in business. Mr. Wellborn has an extensive background in the automotive industry and entrepreneurship. His keen sense of business and thirst to learn, drove him to be a successful businessman. His intelligence and intuition lead him to grow within the automotive field, growing his business from automotive repair to accident investigation, crash analysis, and collision repair.

Mr. Wellborn took many business ventures to find his life purpose, eventually falling into the love of science. From a young age, he felt an eagerness to learn and find deeper relationships within the natural world. Throughout his life, he felt a dedication to research. Always interested in learning and growing his intellectuality, he sought out research and became interested in health science as it was applicable in many different factions throughout healthcare. Through his experience he learned that there are so many opportunities to help people on a daily basis through science.

In 2009 Mr. Wellborn was introduced to the research and testimonials from Guruji Mahendra Trivedi. He was inspired by his distinctive abilities to capture energy and transmit it into alternate materials. Becoming inspired by the testimonials of his work, Mr. Wellborn sought more information on the overall biofield energy healing treatment. With his growth and knowledge about the treatments, he learned a new perspective on science and health he never before would have seen.  Impressed by the thousands of scientific studies and peer reviewed journals in a multitude of fields such as biotechnology and microbiology, he wanted to be involved with the research and positive effects on people’s lives.

Mr. Wellborn was impressed with the ability of the Trivedi Effects and the lasting impressions that the research and care was promoting within the vast population of people that the Trivedi Effect was reaching. The research and continued efforts would touch people’s lives suffering from a multitude of health conditions. Creating advancements in science from cancer to fibromyalgia, Mr. Wellborn understood the need to promote and become involved with the work being conducted.

In 2009, Mr. Wellborn was introduced to the Trivedi Effect, which is where he also introduced to Dahryn Trivedi Gopal Nayak Alice Branton through his involvement with webcasts and research. He was impressed with his passion and abilities within Trivedi Global Inc. Nayak’s experience would lend support to in increasing outreach and the overall successfulness of the organisation.  Through Nayak’s involvement, there have been increased patient populations that are offering testimonials for the benefits of the organisation.

Trivedi effect has been associated with increased health and well being in those that have participated. Through the use of energy transmission, people have found that they have had increased wellness when dealing with fatigue, irritable bowel syndrome, bipolar disorder, inflammation, fibromyalgia, autoimmune disorders, arthritis, chronic pain, and sexual dysfunctions. The transmission of energy has also had effects on sleep disorders, low libido, attention deficit disorder, sleep apnea, psychological disorders, emotional trauma, stress, anxiety, obsessive compulsive disorder, social anxiety, panic attacks, fear, anorexia nervosa, anorexia bulimia, loneliness, low self-esteem, mood swings, restlessness, and autism spectrum disorders. Alongside the overall health benefits that people have experienced, some have identified become closer to their religious faiths. Through using nontraditional techniques, the Trivedi Effect brings people into a more connected state. This state allows them to be more in touch with surroundings, beliefs, and themselves.

The testimonials speak wonders to the overall benefits from the Trivedi Effect. The increased knowledge and overall abilities of the healers give purpose and reason for continuing the research being conducted. The overwhelming push for science and health to reach new standards intrigues. By increasing awareness is holistic and non interventional medicine, research can continue to grow and produce non invasive treatments for people around the world suffering from mental, physical, and emotional issues.

Within the current research being conducted, even those involved are at odds with the overall ability for Mr. Trivedi to alter matter, changing the overall makeup of an organism through the transfer of energy. The ground breaking research and healing that occurs cannot be explained without further research. To increase the experience and knowledge behind the changes have to continue and become more extensive to benefit science. The energy transmissions not only affect people’s physical state, but also their mental state. There have been reported spiritual awakenings and deeper relationships that come about through the Trivedi Effect. Although there are not religious or spiritual practices within the work being accomplished by Mr. Trivedi, there is something to be said about the healer’s abilities to connect people into deeper emotional, physical, mental, and spiritual states.

The Trivedi Organization is reaching people by healing and inspiring. Mr. Trivedi and Nayak find life purpose through healing those with illness, despite the nature of the problem. By bringing together nontraditional healing with holistic approaches such as meditation, yoga, and enthusiasm, the healers within the organisation are able to bring peace to many whom have had no relief of symptoms with traditional medicine. By providing the ultimate calmness and eagerness to cure, the Trivedi Effect reaches those who have lost hope within modern treatments. The Trivedi Effect provides inspiration and indescribable peace to those that have found the pleasure of its overall abilities to transform people and create positive change in their lives.