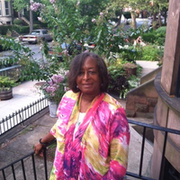 Daphne Luisa Dumas was an early student of the Sciences before her exposure to the possibilities that the world had much to offer in terms of human potential outside of the rigidity of the teachings in her college and university experiences. She began exploring ways that humanity engaged in the everyday process of life and life's learning to find a connection to spirituality, healing, and the intersection of that as her search carried her beyond what was mainstream.She graduated from S.U.N.Y (State University of New York) College at Old Westbury - Planting Fields experimental College, researched literature and taught courses in African-American and Diaspora Literature, as well as held the position of Assistant Dean and International Student Advisor. A semester abroad took her to Universidad Ibero Americana where she studied anthropology.

Ms.Dumas was constantly looking for interesting and expanding opportunities to connect with humanity, and was hired as Director of Early childhood learning models at S.U.N.Y (State University of New York) Research Center to enhance and supervise learning arrangements for students to obtain their Bachelor's degrees while they were employed. While employed there, Ms. Dumas took advantage of graduate offerings in Physics and literature. She consulted with the Bay Shore, Long island, New York's Board of Education and the State Education Department to set up child/neighborhood/ care centers for working mothers so that they could maintain their positions in the workplace. On completion of that project, Dumas worked as a Managing Editor to a small publishing agency in New York City, before being recruited for a position as Assistant Dean of Studies at Sarah Lawrence College in Bronxville, New York. She often took on other tasks that allowed the promotion to Associate Dean of Multicultural Affairs and International Students. She also enrolled in the Graduate Writing Program there, while also pursuing studies in Interfaith Counseling at the New Seminary of New York. Ms Dumas also taught at Medgar Evers College in Brooklyn, New York (C.U.N.Y) City University of New York)

In her attempt to gain wisdom, knowledge and understanding of the healing arts, she made other important connections in Shamanic healing with North and South American Shamans, the use of Crystals in healing, Herbalist from West African traditions, Buddhism and Taoist, Empowerment,Yogic Blue Pearl awakening, TaiChi, Chi Gong, The Eight Tablets movement of energy (Chi) as well as teachings from several other lineages, including Inner Alchemical teachings that purported to enhance the lifestyles and energetic reference of their followers.

It was when Daphne Luisa heard a broadcast and was given her first Energy Transmission by Mahendra Kumar Trivedi that she actually began to understand that although her earlier training was like stepping stones, the scientific application that Guruji Trivedi termed "The Trivedi Effect" was and is a Biofield energy healing treatment that connected one to one's own divine energy source matrix, to nature itself, and the creation. Significant in its application in a short measure of time resulted in an eagerness for her to explore further this form of energy transmission by directed thought and intention that Guruji Mahendra Trivedi, through his divine wisdom and scientific approach has formated to bring happiness to anyone willing to participate in his teachings This life-enhancing connection lead Ms.Dumas to become engaged with Trivedi Global Inc. on a regular basis after having met Guruji Trivedi in his New York Office in 2010. Guruji harnesses the energy and transmits it directly to persons, plants, objects, shifting the molecular structure to its original blueprint, while enhancing it's potential for beneficial change in the atomic structure to degrees that a person's life, or the object, plant or pharmaceutical/nuetraceutica shifts to benefit humanity, changing as its delivery meets the mark, the atomic structure of the object that the energy is directed at. There is no comparative equivalent to this Biofield Energy Transmission, nor has there been Scientifically proven and documented results to the degree that has been established by The Trivedi Effect.

What intrigued Ms. Dumas was that Guruji's process allowed for new Masters to take the hold as transmitters of this Biofield energy, thereby naming Dahryn Trivedi and Alice Branton in the United States of America as transmitters of this masterful healing process. The other Master is Gopal Nayak who has been a Master of this Biofield energy for a longer period of time.having witnessed and heard of miraculous health turnarounds from many over the years,

Ms. Dumas was invited by Guruji Trivedi to participate in an International Science Experiment. Ms. Dumas' group consisted of twenty participants who came together under the auspices and direction of Mr Trivedi to direct Biofield energy as part of a Scientific Research Project. Ms. Dumas participated with healers from Group Five who were part of the Trivedi Healers, and included Arianne Esmene Afaganis, Barbara Marie Bader, Brian A. weekes, Denise Marie fiedler, Dennille Mellesia Smith, Desi Pano, Donna Maria Alija, Elaine Barbara Mullins, Elaine, M. Scorza, Elia O'Donnell, Fabio Massimo Paciucci, Frances Goodman Warlick, Haddon Norman Salt,Inthirani Arul, Jacqueline Y. Andrews, James Jay McLeran, James Stephan Burnett, and Jean Caroline White. She joined this dynamic healers' group to bring about evidential documentation as each participant in the group directed thew transfer of his/her to the items that were pre-selected for this process.The group had overcome fear and had no trepidation, anxiety or low energy to be able to proceed in synchronicity with the direction of thought and intention to harmonize the ingredients presented to them.Because of the training that the group had received over the course of exposure to The Trivedi Effect, this experiment was successfully conducted with each participant allowing for the energetics to be sent without hesitation or concern. It is because of the attention and enhancements received from Guruji's teachings that this group performed with integrity.The twenty member group havbe come to acknowledge each other after having experienced many Biofield Energy Transmissions from Guruji and the Masters. They have said that we are fortunate indeed to have had our Destiny intersect with Mahendra Kumar Trivedi.

Ms. Dumas has overcome restlessness, issues with sleep deprivation, and a rise in her optimism and intelligence as she engages with the Trivedi Effect, allowing her to fully begin to integrate her continual discovery in the realm of Spiritual Awakening and Transformation.