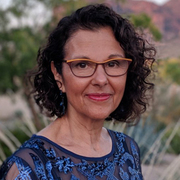 In April 2010, Ms. Alija attended a live remote presentation by Guruji Mahendra Trivedi sharing scientific research validating his unique abilities, introducing The Trivedi Effect®. That evening she experienced immediate results permanently resolving her insomnia and night sweats. In October 2010, Donna sustained a spinal cord injury rendering her a quadriplegic. During that time, she received daily Biofield Energy Treatments/Energy Transmissions from Guruji Mahendra Trivedi. Though her neurosurgeon and doctors repeatedly confirmed she would be a quadriplegic for the remainder of her life, within 5 weeks her bladder and bowel functions returned and she was walking. Her doctors and health care industry workers referred to her as “A Miracle”.

The physical and mental well-being Ms. Alija experienced along with the unprecedented scientific research validating The Trivedi Effect®, confirmed this was the authentic vehicle she had been seeking for her physical, emotional and spiritual evolution. During her convalescence, Donna focused on the transformation of her physical body and consciousness. She received Energy Transmissions from world renowned Spiritual Master and founder of The Trivedi Effect® Guruji Mahendra Trivedi.

In January 2016, Ms. Alija took part in a ground breaking scientific research project with 19 other Trivedi Effect members from the United States and Canada. From her residence in Longview, WA U.S.A. Donna, along with her colleagues, were able to transmit this energy to herbal mineral products. The objects receiving this energy were located at an undisclosed third-party laboratory in India. The results astounded the scientific community and have been published in American peer-reviewed scientific journals.

Due to The Trivedi Effect®, Donna Alija has become a scientifically validated and accepted Biofield Life Force Energy Conduit with the ability to harness the Life Force Energy of Nature and transmit this intelligent energy anywhere on the planet.

Ms. Alija has no religious affiliation nor does she endorse any healing modality. She feels it is important that a person follow their own inner guidance and beliefs. It has been reported those following religious practices such as Baptist, Buddhism, Catholicism, Christianity, Hinduism, Judaism and Scientology have felt a deepening of their faith due to The Trivedi Effect®. Many individuals have discovered their life purpose and soulmate, attained higher levels of consciousness; experienced Spiritual Awakenings and enhanced their spiritual practices during meditation, mindfulness and yoga; accelerating their Spiritual Journey. Many healers within the fields of alternative and complimentary medicine such as Energy Medicine, Energy Healing, Functional Medicine, Holistic Medicine, Integrative Medicine, Healing Touch, Qigong, Reiki and Tai Chi have reported increased abilities.

Currently proven by over 6,000 scientific research experiments and a vast collection of research published in numerous international peer-reviewed scientific journals, Guruji Mahendra Trived­i has the extraordinary ability to harness and transmit this intelligent universal energy through his thoughts, successfully transforming living organisms and non-living materials anywhere on the planet. His Biofield Energy Treatments exhibit an inherent intelligence treating each recipient in a uniquely different manner. This energy optimizes the receiver’s cellular structure at the molecular and atomic levels; creating positive and lasting physical, mental, emotional and behavioral changes. This rare phenomenon has become revered worldwide as The Trivedi Effect®.

The results, astonishing the global scientific community, led to collaborations with leading scientists such as twenty-three-time, Nobel Prize nominee materials scientist Dr. Rustum Roy of Penn State University. From Roy’s experiments and validations of Mahendra Trivedi’s unique abilities, he predicted a new scientific paradigm being established: “I see him as the completion of what India has brought to the world in modern scientific terms… Science is the religion of the world. It’s going to be very tough for the establishment to hold onto old ideas. I think with Mr. Trivedi’s potential, he may become a pioneer in loosening the grasp of old science… I have no doubt Mr. Trivedi will change the face of science and human well-being in my lifetime.”

Experiments were also conducted at the California Pacific Medical Center Research Institute to evaluate The Trivedi Effect® Biofield Energy Treatment on sample cancerous and noncancerous cells. The results confirmed undeniably that this energy embodies inherent intelligence capable of recognizing and treating each living organism based on its unique requirements:

“The results suggest that the biofield treatment administered in the laboratory can induce cell death of brain cancer cells from a distance while at the same time promoting viability of normal brain cells. Such selective efficacy against cancer cells is the sought after ‘holy grail’ for novel experimental anti-cancer agents and makes this work all the more exciting.” ~ Garrett L. Yount, Ph.D.

Trivedi Global, Inc. mission statement is to use The Trivedi Effect® to usher in a new era, integrating scientific research with consciousness thereby vastly improving the condition of humanity on a global scale.