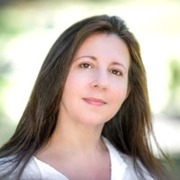 Madeline E. Michaels has been a Holistic Health Practitioner and Licensed Massage Therapist for over 25 years. Prior to that, she studied and worked as a Certified Gemologist in New York, and as a Jeweller and Graphic Designer in Israel. Ms. Michaels was born in the US and spent fifteen years in Israel from the age of 10 before returning back in 1985.

A natural healer since birth, her spiritual journey hastened at the age of 16 where she began experiencing the ability to see energy and light around herself and others. These experiences paved the path for a deeper yearning to understand life and its mysteries. By the age of 21 Ms. Michaels was self-taught in yoga and by 25, she moved into the SYDA (Siddha Yoga Dham of America) Foundation Ashram in New York City. For the next 4 years she studied under the supervision Gurumayi Chidvalasananda, a Siddha Guru. During this time, she fully immersed herself into her spiritual development.

Ms. Michaels received her NY State License for Occupational Studies in 1993. Her studies involved both Western and Eastern theory and techniques and advanced applications in Western techniques (such as sports massage, trigger point therapy and myofascial release) plus complementary modalities such as Thai massage, Tuina, and reflexology. She received an in-depth preparation in anatomy and physiology, massage-related pathology, neurology, and kinesiology to provide the foundation for effective client assessment and treatment. In 1997 Ms. Michaels received two accolades from Vogue and Allure magazines rating her work as “Best Massage NYC”.

In April 2011, Ms. Michaels attended her first online webcast with Guruji Mahendra Kumar Trivedi and within a month she met him and received her first in person biofield energy treatment in New York. What she experienced was life changing and she has been participating in the “Trivedi Master Wellness” programs ever since.

Mr. Trivedi has the unique ability to harness the energy from the universe and transmit it to living organisms or nonliving materials anywhere in the world. The energy corresponds intelligently and beneficially to the unique needs of the treated subject, optimizing the recipient’s potential and thus altering their behaviors and characteristics. This remarkable phenomenon is called the Trivedi Effect®.

Mr. Trivedi created an invaluable database on the power of consciousness and human potential, with over 4,000 scientific studies conducted on the Trivedi Effect® in agriculture, livestock, biotechnology, microbiology, genetics, human health, cancer and materials science. Furthermore, nearly 200 papers have been published in leading international peer-reviewed scientific journals documenting measured results of the Trivedi Effect®, thus excluding the possibility of the placebo effect. Astounding results have led to collaborations with leading scientists such as Dr. Rustum Roy, a materials scientist from Penn State University who was nominated for the Nobel Prize 23 times. Through his corroboration with Guruji Mahendra Trivedi, Dr. Roy predicted that Mr. Trivedi’s science research would trigger the upstart of a new scientific paradigm of understanding. He had this to say about Mr. Trivedi and his abilities:

“I see him as the completion of what India has brought to the world in modern scientific terms. Science is the religion of the world. It’s going to be very tough for the establishment to hold onto old ideas. I think with Mr. Trivedi's potential, he may become a pioneer in loosening the grasp of old science.  I have no doubt Mr. Trivedi will change the face of science and human well-being in my lifetime.”

Mahendra Kumar Trivedi’s biofield treatments have assisted people with a wide range of varying conditions and problems with varying degrees of severity that, with the support of science research performed at the California Pacific Medical Center Research Institute, it has been concluded that the biofield energy treatments administered by Mr. Trivedi have an inherent intelligence that treats each recipient and specimen uniquely. In one particular study at the California Pacific Medical Center Research Institute, Mr. Trivedi administered his biofield energy treatment to a mixed sample of both cancerous cells and noncancerous cells. The results showed that the biofield treatment was able to kill the cancerous cells while at the same time promote the viability of the noncancerous cells:

“The results suggest that the biofield treatment administered in the laboratory can induce cell death of brain cancer cells from a distance while at the same time promoting viability of normal brain cells. Such selective efficacy against cancer cells is the sought after ‘holy grail’ for novel experimental anti-cancer agents and makes this work all the more exciting.” - Dr. Garrett L. Yount, Ph.D.

In January 2016, Ms. Michaels participated in a science research study alongside 19 of her other colleagues to authenticate her biofield energy healing treatment abilities.

Her colleagues are all natural healers like herself, who have been receiving the benefits of Mr. Trivedi’s energy treatments over several years.