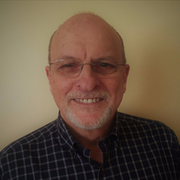 Gary Gerber has a BA Degree in Natural Science from Goshen College, Indiana and a Masters Degree in Theology from the University Of Rochester, New York.  Always fascinated by the inter-play of the physical and spiritual dimensions of human existence, he trained professionally as a Marriage and Family Therapist becoming a Clinical Fellow with the American Association for Marriage and Family Therapy. He is currently in private practice in Alberta.

Throughout his professional life Mr. Gerber has been a healer in the spiritual and mental health professions, helping people to achieve altered perceptions with respect to their reality so as to enjoy greater calmness, happiness and self esteem. His professional life has seen him step into the fire of human conflict with individuals and institutions, helping them to achieve higher levels of peace and wellbeing.  Realizing that trauma underlies much human discord, Mr. Gerber focused on treatment of trauma and more specifically as it relates to addiction.

Mr. Gerber’s deep intrigue with the mystery of higher consciousness and his deeply held belief that a healer must always be involved with his or her own transformation, led him to Guruji Mahendra Trivedi.  Mr. Gerber has always been drawn to methods that lend themselves to scientific verification. He was impressed to learn that Mr. Trivedi had performed over 4000 experiments proving the efficacy of this phenomenon known as the Trivedi Effect. These experiments challenged critics who were inclined to dismiss this healing energy as fraudulent or as ‘Placebo effect’.

Mr. Gerber received a remote energy transmission, from Mr. Trividi and felt a powerful energy surging through his body, giving him a sense of indescribable peace, happiness and pleasure. After having explored and experienced the vital and life changing benefits of the Trivedi Effect,  he knew that not only was this a transformational gift to the world, but that he had to play a role in facilitating it’s reach.

The intelligence of Mr. Trivedi’s  biofield energy treatments enables energy to adapt to living organisms and nonliving materials. In 2011, Mr. Gerber became more involved in this transformational endeavor and eventually joined the Trivedi Master Healing program where over one hundred participants were trained and gifted with the ability to transmit this healing and transformational miracle. He was impressed on one occasion to learn that this energy could be imparted to him sufficiently from Mr. Trivedi for a short period of time, so as to enable him to project it onto a bottle of wine and change its taste dramatically. The more the energy was projected onto the wine the more the wine adapted to each individual pallet that tasted it. Truly an impressive result!

Mr. Gerber also met other healing masters through Trivedi Global Inc. - Alice Branton, Gopal Nayak and Dahryn Trivedi – all of whom have been endowed with highly developed powers to perform biofield energy treatments on living organisms and inanimate materials. In addition to Mr. Trividi’s beneficial energy transmissions, participants in the program have been fortunate to receive transmissions from these healing masters as well.

During his association with Trivedi Master Wellness programs, Mr Gerber has observed the testimonials of those who have been the recipients of this energy.  The reports are life changing and miraculous. CEO of Trivedi Global Inc., Alice Branton, received first hand reports from those blessed by this energy.  People have reported relief from  a wide variety of physical conditions: attention deficit disorder, irritable bowel syndrome, sleep disorders such as insomnia and sleep apnea, fibromyalgia, muscle pain, erectile dysfunction, low libido, sexual dysfunction, chronic fatigue syndrome, arthritis, chronic pain, joint pain, low energy, severe migraines and many more physical conditions.

Mr. Trivedi is tremendously generous and passionate and his mission is to usher in new research to vastly improve the human condition.  Mr. Gerber has benefited from this generosity having greater freedom from fear, deeper sleeping, financial improvements, higher levels of energy, deepened relationships with family and friends and an enhanced sense of mental wellbeing.  On a number of occasions his children and grand children have received these biofield treatments remotely and have exhibited greater happiness, calmness, eagerness and motivation.

Mr. Trivedi does not affiliate with any religion such as Christianity, Judaism, Islam, Hinduism, Buddhism or Scientology. Rather, he encourages everyone to follow their own inner beliefs. Mr. Trivedi emphasizes listening to one’s inner guidance system and has consistently showered his protégés with energy transmissions so as to raise their consciousness and thereby heighten their awareness and receptivity to the larger universal wisdom or the Divine. Many who have enjoyed this energy, report deeper experiences in their spiritual practices such as yoga, meditation, mindfulness and various other spiritual endeavors. Many also feel more certain of their life purpose and speak of a deeper connection to nature and their deep inner self.

Mr. Trivedi does not endorse any healing modality. Many healers from a variety of modalities have found that they are more effective in their practice of healing having experienced the Trivedi Effect. Practitioners of Qi Gong, Tai Chi, Healing Touch, Reiki, Energy Medicine, Integrative Medicine, Functional Medicine and Holistic Medicine speak of increased capabilities in their work.

A growing respect and curiosity abound with regard to Mr. Trivedi’s work.  The Trivedi Effect has been studied and scrutinized by scientists of the highest caliber. Mr. Trivedi’s experiments in life sciences and material sciences include: microbiology, material science, biotechnology, agriculture, livestock, human health, cancer and genetics. He has over 200 publications which have been adopted by the National Institutes of Health and hundreds of universities around the world.  Such universities as Oxford, Cambridge, MIT, Harvard, Princeton, Brown, Columbia, Penn State, Dartmouth, and Yale appear on this highly acclaimed list.

Dr. Rustom Roy, a materials scientist at Penn State University has been nominated for the Nobel Prize 23 times. Dr. Roy studied the abilities of Mr. Trivedi extensively and has been quoted as saying, “I see him as the completion of what India has brought to the world in modern scientific terms... Science is the religion of the world. It’s going to be very tough for the establishment to hold onto old ideas. I think with Mr. Trivedi’s potential, he may become a pioneer in loosening the grasp of old science.”  Dr. Roy continues to say, “Mr. Trivedi will change the face of science and human well-being in his lifetime.”

Mr. Trivedi has consistently and successfully transformed living organisms and non living materials at the atomic, molecular and cellular levels.  He can transfer energy through his thoughts from a distance, directed by his intention. In one very compelling experiment at the California Pacific Medical Research Institute, Mr. Trivedi projected biofield treatments on a mixed sample of cancerous and non cancerous brain cells. It was shown conclusively that the cancerous cells could be killed leaving the normal cells intact. This fact undeniably confirms the intelligence of this healing energy and its ability to differentiate between cancerous and non cancerous cells.

One of the outstanding dimensions of Mr. Trivedi’s work is that he has the ability to focus his intention to equip others in harnessing these powers.  He has been working with a select team of very talented trainees for the purpose of equipping them to become healers and to share this Trivedi Effect with the world.  Eighteen healers along with Mr. Gerber participated in a scientific experiment where they treated living organisms and non living materials with Trivedi biofield energy healing treatment.  This esteemed team includes:  Aileen Lee, Aksana Hancharuk, Carola Sand, Debra Schnitzer, Dr. Rudina Thanasi, Eileen Meagher, Faith Pyka, Johanna Stromsnas, Judith Shapiro, Laura Streicher, Lorraine Hachfeld, Matthew Hornung, Patricia Rowe, Sally Henderson, Sheila Benson, Shirley Holmlund, and Stephen Salters. The results of this experiment impressed scientists and have shown that Mr. Trivedi can equip others to transmit this energy also.