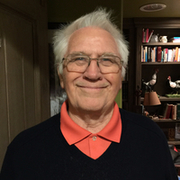 Haddon Salt was determined with a terminal ailment at the age of 8. The doctors said nothing could be done so his parents turned to Christian Science and it’s primitive healing philosophy. Looking at God from a scientific point of view had always interested him because you must measure the outcome. He is now 88 and very healthy. He has been looking at Christianity from a scientific point of view most of his life. He attended a private school in England and then went to work with his father in his company. He spent a couple of years in the Royal Navy, then back to work in his father’s business, got married and had three beautiful children.

In 1960 Haddon purchased his own restaurant, sold it in 1964 and immigrated to California with $10,000. Four years later he became the 3rd largest stockholder in the largest fast food company in the world and was nominated for the Horacio Alger Award in 1970.

Next Haddon created an international trillion-dollar real estate industry in Mexico. He also was involved in commercial fishing and helped create two of the world’s most healthy and successful fisheries.

Haddon’s father had taken an interest in Scientology in the 1950s and met L. Ron Hubbard, the founder, and was taken with his common sense approach and utter disregard for stupidity. Seeing this as a good addition to his growth, Haddon spend many years learning and attending most of their workshops. After a point he felt he needed to move on. Haddon continued following his Christian Science church teachings and have added other healing modalities to his experience including Quantum Touch, Hypnosis Practice, NLP Life Coaching, Reiki and Compassion Key.

Haddon was drawn to the Trivedi Effect® because of it’s ability to transform and elevate the production of plants and trees, Haddon joined the Trivedi Group in late 2012 and has been attending all of their workshops and retreats since. Haddon has received years of energy transmissions and joined a healing group in 2015. As a follower of this organization, he has been aware of the incredible amount of people who have participated in “Trivedi Master Wellness” programs which were designed so people could access firsthand the energy that powers the Trivedi Effect®. The reports have been described as life-changing and miraculous with people claiming that the brought-about relief from debilitating illnesses, diseases and disorder, such has sleep disorder, sleep apnea, chronic fatigue syndrome, irritable bowel syndrome (IBS), attention deficit disorder (ADD), attention deficit hyperactivity disorder (ADHD), fibromyalgia, arthritis, chronic pain, muscle pain, join pain, low libido, sexual impotency, erectile dysfunction, sexual dysfunction, premenstrual dysfunction (PMS), severe migraines, low energy & more. Others insist having improved immune systems and greater self-healing abilities including those suffering from cancer and those who have receive chemotherapy and radiation treatments.

Mr. Trivedi has no religious affiliation and does not endorse any healing modality, recommending everyone follow their own beliefs and inner guidance. However, some report the Trivedi Effect® has deepened their religious faiths (Christianity, Catholicism, Protestant, Baptist, Judaism, Scientology, Hinduism and Buddhism). By entering into higher levels of consciousness thorough the Energy Transmissions, people insist having experience Spiritual Awakenings, more profound experiences during spiritual practices such as yoga, meditation and mindfulness, and greater progress along their spiritual journey.

Additionally, many people claim they have discovered their life’s purpose and feel more deeply connected to nature, spirit and their souls. Others find that their capabilities as healers in areas such as Integrative Medicine, Holistic Medicine, Functional Medicine, Energy Medicine, Energy Healing, Healing Touch, Tai Chi, Reiki, Qi Gong and other alternative and complementary medicine modalities, has been heightened.

Despite the increasing number of over 250,000 individuals who attest o beneficial results in physical health, sexual satisfaction, relationships, emotional health, mental potency, business ventures, finances and much more, Mr. Trivedi was aware of the possibility of the placebo effect. Thus he sought to evaluate authenticity of the Trivedi Effect® through rigorous, scientific application.

Mr. Trivedi created an invaluable database on the power of consciousness and human potential, with over 4,000 scientific studies conducted on the Trivedi Effect® in agriculture, livestock, biotechnology, microbiology, genetics, human health, cancer and materials science. Furthermore, nearly 200 papers have been published in leading international peer-reviewed scientific journals documenting measured results of the Trivedi Effect®, thus excluding the possibility of the placebo effect.

Astounding results have led to collaborations with leading scientists such as Dr. Rustum Roy, a materials scientist form Penn State University who was nominated for the Nobel Prize 23 times. Through his corroboration with the Guruji Mahendra Trivedi, Dr. Roy predicted that Mr. Trivedi’s science research would trigger the start of a new scientific paradigm of understanding. He had this to say about Mr. Trivedi and his abilities, “I see him as the completion of that India has brought to the world in modern scientific terms…Science is the religion of the world. It’s going to be very tough for the establishment to hold onto old ideas. I think with Mr. Trivedi’s potential, he may become a pioneer in loosening the grasp of old science…I have not doubt Mr. Trivedi will change the face of science and humans well-being in my lifetime.”

Although it seems clear that the Trivedi Effect® energy has some sort of inherent intelligence that is capable of distinguishing and treating each recipient uniquely, a study conducted to assess the Trivedi Effect® biofuels energy treatments on a mixes sample of cancerous and noncancerous cells at the California Pacific Medical Center Research Institute provides undeniable support to his theory:

“The results suggest that the bio field treatment administered in the laboratory can induce cell death of brain cancer cells from a distance while at the same time promoting viability of normal brain cells. Such selective efficacy against cancer cells is the sought after ‘holy grail’ for novel experimental anti-cancer agents and makes this work all the more exciting.”

The Trivedi mission statement is to utilize the Trivedi Effect® to usher in a new era that integrates scientific research with consciousness to vastly improve the human condition and benefit humanity on a global scale. Currently, Ms. Branton and Mr. Trivedi are continuing their investigation of the energy that powers the Trivedi Effect® via collaboration with an international, multi-billion dollar research organization to study the impact of the Trivedi Effect® on revolutionary pharmaceutical and nutraceutical products with great promise for the treatment of immune disorder, inflammatory diseases, cancer and obesity; as well as for anti-again, antioxidants, probiotics, probiotics and overall health for the betterment of the world.

Haddon’s search is for personal growth and fulfillment of earths’ potential. He feels the work that Mr. Trivedi is doing with plants, trees, animals and human beings is truly remarkable — indeed, the most important work happening on this planet right now and he is very proud to be a part of it.