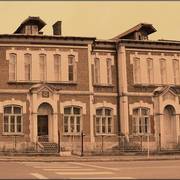 The Bukovina Institute was founded in 1994. Its main research field is the history of Bukovina, the former province of the Austro-Hungarian Empire. The research activity focuses on the cultural, social, political and demographic development of this region, on the ethnic diversity and national identities, as well as on the preservation and value of the cultural heritage of Bukovina. Apart from the research activity, the institute organizes annual international symposia about the history of Bukovina, together with other European institutions. The results of the scientific research are published in the periodical magazine of the institute, "Analele Bucovinei", which is appearing two times a year since 1994.