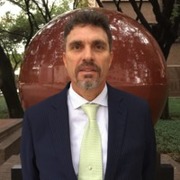 Jay A. Prague graduated High School in 1983. Working in different jobs in Petrochemical Industries for at least 35 years. He has been a supervisor over operations for the past 20 years. Also, running a small ranch in Texas for the past 16 years. Jay actively sought someone who could cultivate his abilities and knowledge about consciousness and the universe. Although he has worked with some of America’s top transformational leaders, energy healers, he was unsatisfied with the limitations of mind/body conditioning.

In February 2011, Jay met Guruji Mahendra Trivedi. Mr. Trivedi has the unique ability to harness the energy from the universe and transmit it to living organisms or nonliving materials anywhere in the world. The energy performs intelligently and beneficially to the recipient’s unique needs, optimizing the recipient’s potential thus altering their behaviors and characteristics. This phenomenon is called the Trivedi Effect®.

Jay was quite impressed with Mr. Trivedi’s extensive 4,000 scientific studies in human health, cancer, microbiology, genetics, livestock, agriculture, biotechnology, and materials science and over 250,000 testimonials on the Trivedi Effect’s® power to uplift every aspect of the human condition. He experienced his first Biofield Energy Healing Treatment while attending a webinar event.

Having a Heredity Kidney Disease, Jay does lab work every 3 months. His results have been good since receiving the Trivedi Effect®. His Kidney function measured, by creatinine level in the blood, have remained stable at 1.34mg/dl. This is after receiving a kidney from his wife of 29 years, in September 2015.

Jay became a Healer with the ability to harness and transmit the intelligent energy of the Trivedi Effect® after receiving Biofield Energy Healing Treatments with “Guruji” Mahendra Trivedi for the past 5 years.

Mahendra Kumar Trivedi has the unique ability to harness the energy from the universe and transmit it to living organisms or nonliving materials anywhere in the world. The energy performs intelligently and beneficially to the recipient’s unique needs, optimizing the recipient’s potential at the cellular, molecular, and atomic level, thus leading to lasting changes in their behaviors and characteristics. This unique phenomenon has become world renowned as the Trivedi Effect®.

Mr. Prague was drawn to the Trivedi Effect’s® ability to transform and elevate his own human experience; and the documented scientific experiments on the Trivedi Effect® gave him confidence that this was the authentic means for transformation that he had been seeking. Through his association with Mr. Trivedi and his guidance, he became more spiritual each day, with fully developed capabilities to harness and transmit the intelligent energy of the Trivedi Effect®.

mr. prague and 17 of his colleagues have participated in biofield energy treatment experiments transmitting energy across the globe. this has already resulted in 1 international peer-reviewed science publication authenticating their abilities regarding the Trivedi effect®. his 17 colleagues are as follows:

Mr. Trivedi has no religious affiliation and does not endorse any healing modality, recommending everyone follow their own beliefs and inner guidance. However, some report the Trivedi Effect® has deepened their religious faiths. By entering higher levels of consciousness through the Energy Treatments, people insist having experienced Spiritual Awakenings, more profound experiences during spiritual practices such as yoga, meditation and mindfulness, and greater progress along their Spiritual Journey. Additionally, many people claim they have is covered their life’s purpose and feel more deeply connected to Nature, Spirit, and their souls.

Others find that their capabilities as healers in areas such as Integrative Medicine, Holistic Medicine, Functional Medicine, Energy Medicine, Energy Healing, Healing Touch, Tai Chi, Reiki, Qi Gong, and other alternative and complementary medicine modalities, has been heightened. Despite the increasing number of over 250,000 individuals who attest to beneficial results in physical health, sexual satisfaction, relationships, emotional health, mental potency, business ventures, finances and much more, Mr. Trivedi was aware of his possibility of the placebo effect. Thus, he sought to evaluate authenticity of the Trivedi Effect® through rigorous, scientific application.

Mr. Trivedi created an invaluable database on the power of consciousness and human potential, with over 4,000 scientific studies conducted on the Trivedi Effect® in agriculture, livestock, biotechnology, microbiology, genetics, human health, cancer, and materials science. Furthermore, nearly 200 papers have been published in leading international peer reviewed scientific journals documenting measured results of the Trivedi Effect®, thus excluding the possibility of the placebo effect.

Astounding results have led to collaborations with leading scientists such as Dr. Rustum Roy, a materials scientist from Penn State University who was nominated for the Nobel Prize 23 times. Through his corroboration with Guruji Mahendra Trivedi, Dr. Roy predicted that Mr. Trivedi’s science research would trigger the upstart of a new scientific paradigm of understanding. He said this about Mr. Trivedi and his abilities, “I see him as the completion of what India has brought to the world in modern scientific terms. Science is the religion of the world. It’s going to be very tough for the establishment to hold onto old ideas. I think with Mr. Trivedi's potential, he may become a pioneer in loosening the grasp of old science... I have no doubt Mr. Trivedi will change the face of science and human wellbeing in my lifetime.”

“The results suggest that the biofield treatment administered in the laboratory can induce cell death of brain cancer cells from a distance while at the same time promoting viability of normal brain cells. Such selective efficacy against cancer cells is the sought after ‘holy grail’ for novel experimental anticancer agents and makes this work even more exciting.” Garrett L. Yount, Ph.D.

Currently, Mr. Trivedi is continuing their investigation of the energy that powers the Trivedi Effect® via collaboration with an international, multibillion dollar research organization to study the impact of the Trivedi Effect® on revolutionary pharmaceutical and nutraceutical products with great promise for the treatment of immune disorders inflammatory diseases, cancer and obesity; as well as for anti-aging, antioxidants, probiotics, prebiotics and overall health for the betterment of the world.