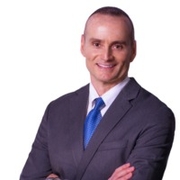 Joseph Foty completed his 4-year Nursing Degree from the University of California Los Angeles and Santa Monica City College in Santa Monica California in 1999. After receiving his degree, he worked as a medical/surgical nurse at Cedars Sinai Medical Center in Hollywood California and UCLA Medical Center from 1999 - 2006 specialising in HIV, Oncology and Psychology while providing nursing care to patients suffering from an array of many illnesses. Mr. Foty realised early on, that he had a special interest in helping others attain their true health potential.

In 2006, he decided to make a change from hospital patient care. He began his career in Real Estate Sales helping clients to attain their true wealth potential, and is now a full time Real Estate professional.Mr. Foty is a natural healer by birth with an unbounded enthusiasm and love of life. He has always been fascinated by the effects of energy healing on human health, mental well-being and happiness, and has an eagerness to help others overcome their challenges and gain deeper fulfilment in their lives. From an early age, he began his quest to seek deeper truth, revealing the power of consciousness and its impact on people and things around him.

He began his spiritual journey and a series of spiritual awakenings that would lead to more than he could ever imagine in his late 30's. During this period, he felt more drawn to healing, Energy Medicine, spiritualism, and spiritual practices that were waking up his life purpose.

Still seeking, he studied quantum bio-feedback and purchased a quantum bio-feedback device to help heal himself and heal others through this energy work. Even though there were benefits from this, Mr. Foty knew there was something more and kept seeking to find out what that was.In 2011 at an event in Los Angeles, Mr. Foty was introduced to Guruji Mahendra Kumar Trivedi who he had been told was a true healer and had exceptional abilities. It was indeed a life changing event.

While sitting in front of Mr. Trivedi waiting to receive his very first in-person energy treatment, he looked directly into his eyes and saw an extraordinary light and felt something that he'd never felt before ever in his life. Immediately he knew he had met a master who could change the world through his ability to use energy. Joe finally felt that he had found what he had been searching for his entire life.Mahendra Trivedi has the unique ability to harness the energy from the universe and is able to transmit it anywhere on earth. He can infuse this energy into both living organisms and non-living materials to optimise their potential. This exceptional phenomenon has become acclaimed internationally as the Trivedi Effect®. World-renowned scientists and research institutes have tested the Trivedi Effect® in over 4,000 scientific studies in many life sciences and material sciences including biotechnology, agriculture, livestock, material science, cancer, genetics and microbiology.

He has nearly 200 publications in leading international peer-reviewed scientific journals, all supporting the extraordinary results reported through testimonials, thus excluding the possibility of the placebo effect. These publications have been adopted by the National Institute of Health and around 900 universities in the US and hundreds from around the world including Princeton, Yale, MIT, Brown, Columbia, Harvard, Penn State, Dartmouth, Cambridge, Oxford and Cornell.

Through utilising the potential of the human biofield, Mahendra Trivedi has successfully transformed both living organisms and non-living material at the atomic, molecular and cellular structures of existence to significantly enhance, raise the potency and alter the characteristics and behaviour of the subject matter being treated. This groundbreaking research constitutes an invaluable body of knowledge for scientists to understand the power of consciousness.

The astounding results from the Trivedi Effect® have led to Mr. Trivedi’s collaborations with leading scientists such as Dr. Rustum Roy, a materials scientist from Penn State University who was nominated for the Nobel Prize 23 times. Through his corroboration with Guruji Mahendra Trivedi, Dr. Roy predicted that Mr. Trivedi’s science research would trigger the upstart of a new scientific paradigm of understanding. He had this to say about Mr. Trivedi and his abilities;

“I see him as the completion of what India has brought to the world in modern scientific terms. ... Science is the religion of the world. It’s going to be very tough for the establishment to hold onto old ideas. I think with Mr. Trivedi's potential, he may become a pioneer in loosening the grasp of old science. I have no doubt Mr. Trivedi will change the face of science and human well-being in my lifetime.”

Mr. Trivedi is currently collaborating with an international research organization to study the impact of The Trivedi Effect® on nutraceuticals for overall health, prebiotics, probiotics, antioxidants, anti-aging and in products that can potentially treat cancer, obesity and inflammation etc., and in pharmaceuticals in hopes of creating new, revolutionary products for the benefit of all humankind.

From his first meeting with Guruji, Mr. Foty knew he would play a pivotal role in transforming his life. In mid 2011 he began the “Healers Mastery Program.” He immediately enrolled and took this opportunity to continue receiving his energy treatments, to optimise growth in consciousness as well as developing his abilities to dobiofield energy treatments.

These experiments were designed to give authentic validation to their biofield energy treatments that were sent remotely, over thousands of miles away.

His colleagues are all natural healers who like himself, have been receiving Mr. Trivedi’s energy treatments over several years.