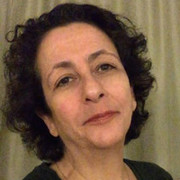 Judith Marian Shapiro has worked in finance as a bookkeeper and office manager in numerous industries. Ms. Shapiro has always been highly drawn to alternative therapies for transformation and healing. She is a natural born healer. After a 15 year career in corporate she decided to pursue her life’s purpose of healing. She graduated from North Haven Academy Paul Mitchell Partner School with high honours in Esthetics in 2005 and went on to get her license to be able to be an Esthetician in any state. She incorporated Healing Touch, Energy Healing, Anti-Stress Treatments, Acupressure and Facial Massage in her skin care practice.

She realised that the healing experienced by herself and others was not permanent, but temporary relief with no real transformation. In March 2011 she was introduced to Guruji Mahendra Trivedi and the Trivedi Effect® through a webcast. Within a short period of time the 3 year and painful Temporomandibular joint disorder (TMJ, TMD) she had been seeking an answer for was permanently healed by receiving Guruji Mahendra Trivedi’s Biofield Energy transmissions. The Trivedi Effect® transcends all of her previous experience for her self healing and to help others.

The Biofield Energy healing treatments received from Mr. Trivedi had healed her TMJ and a number of other challenges she had been experiencing that no other holistic medicine or health care industry had been able to relieve.

Guruji Mahendra Trivedi has the unique ability to harness Universal Energy - Divine Grace and transmit it to living organisms and nonliving materials anywhere in the world. This energy is intelligent and knows specifically what each individual needs. This ability creates lasting changes and real transformation. The phenomenon or process to harness the ability is called the Trivedi Effect®.

Ms. Shapiro is one of the 18 in her test peer group and out of over 100 Trivedi Healers who have the ability to harness Divine Grace, Life Energy with the phenomena of the Trivedi Effect® and can transmit this to anyone anywhere on this planet. They are also using this phenomenon - the Trivedi Effect® to help the people. Ms. Shapiro and her seventeen colleagues from various states in the US, from Canadian provinces, and the countries of Finland and Albania are: Aileen Carol Lee, Aksana Hancharuk, Carola Marina Sand, Debra Jane Schnitzer, Dr. Rudina Thanasi, Eileen Mary Meagher, Faith Ann Pyka, Gary Richard Gerber, Johanna Catharina Stroman as, Laura Nelson Streicher, Lorraine Marie Hachfeld, Matthew Charles Hornung, Patricia M. Rowe, Sally Jean Henderson, Sheila Maureen Benson, Shirley Theresa Holmlund, and Stephen P. Salters.

In a study conducted to assess the Trivedi Effect® Biofield Energy treatments on a mixed sample of cancerous and noncancerous cells at the California Pacific Medical Center Research Institute provides undeniable support to the theory that the energy has inherent intelligence capable of distinguishing and treating each recipient uniquely.

“The results suggest that the Biofield treatment administered in the laboratory can induce cell death of brain cancer cells from a distance while at the same time promoting viability of normal brain cells. Such selective efficacy against cancer cells is the sought after ‘holy grail’ for novel experimental anti-cancer agents and makes this work all the more exciting” - - Garret L. Yount, Ph.D.

Mr. Trivedi recommends everyone to follow their own belief and guidance system especially when it comes to any religious affiliation and he doesn’t endorse any healing modality, but people often report a deepening of their religious faith and connection (Christianity, Catholicism, Protestant, Baptist, Judaism, Scientology, Hinduism and Buddhism). They also report deeper experiences during their spiritual practices and spiritual journey in yoga, meditation and mindfulness. Also many give testimony to having discovered their life’s purpose and find their capabilities as healers in Integrative Medicine, Holistic Medicine, Functional Medicine, Energy Medicine, Energy Healing, Healing Touch, Tai Chi, Reiki, Qi Gong and other medicine modalities have been enhanced and heightened.

While over 250,000 have attested to benefits in so many areas of their life, Mr. Trivedi was aware of the placebo effect and he wanted authenticity. The Trivedi Effect® was tested in over 4,000 scientific studies with world-renowned scientists and research institutes in agriculture, livestock, biotechnology, microbiology, genetics, human health, cancer and material sciences. Nearly 200 papers have been published in leading international peer reviewed scientific journals supporting and documenting measured results and have excluded the possibility of the placebo effect. These publications have been adopted by the National Institutes of Health (NIH), approximately 900 U.S. universities and hundreds of top universities internationally. These universities include Princeton, MIT, Yale, Columbia, Brown, Harvard, Penn State, Dartmouth, Cambridge, Oxford and Cornell.

Mr. Trivedi collaborated with leading scientists. One, Dr. Rustum Roy, a materials scientist from Penn State University who was nominated for the Nobel Prize 23 times predicted that Guruji Mahendra Trivedi’s science research would trigger the upstart of a new scientific paradigm of understanding. Dr. Roy said “I see him as the completion of what India has brought to the world in modern scientific terms. Science is the religion of the world. It’s going to be very tough for the establishment to hold onto old ideas. I think with Mr. Trivedi’s potential, he may become a pioneer in loosening the grasp of old science” and “I have no doubt Mr. Trivedi will change the face of science and human well-being in my lifetime.” Mr. Trivedi is a man full of miracles with a mission to transform and improve the existence of people on this planet.

Holding true to the Trivedi mission statement “To utilize the Trivedi Effect® to usher in a new era that integrates scientific research with consciousness to vastly improve the human condition and benefit humanity on a global scale” Mr. Trivedi and Ms. Branton continue their studies and testing of the energy that powers the Trivedi Effect® by collaborating with an international, multi-billion-dollar research organization studying how it impacts revolutionary pharmaceutical and nutraceutical products with great promise in treating immune disorders, inflammatory diseases, cancer and obesity and for anti-aging, antioxidants, prebiotics, probiotics and overall health to benefit the whole world.