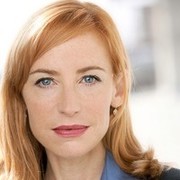 Karen Strassman is an actress, voice-over artist and dialect coach, known the world over for hundreds of characters she has created in many forms.  While Karen’s outward career path has been focused as an actress, her life journey has led her through an in-depth exploration of the unseen world and the healing properties of energy.

Whether on-camera or behind a mic, Karen is extremely versatile.  She has played roles as varied as the brilliant and empathic scientist, Devra Bogdanovich, of Ingress; a dying immigrant from Northern Ireland; doctors and lawyers, the quirky bookish OCD accountant recurring on Weeds; to a killer’s trailer trash mother on Criminal Minds & a cut-throat Lawyer on Silicon Valley.

She has created hundreds of voice-over characters of all shapes, sizes, genders, ages, and species, from classic Disney princesses to iconic villainesses, to talking jellyfish and shy tadpoles.  Karen stars as 'Jinja' in the new Nicktoons series, Monsuno, and she also voices every other female character in the show (over 24 at last count).

Karen has dual American/French nationality.  She spent almost half her life in France and is fluent in French (although she's also worked in German, Spanish, Danish, Italian and Yucatec!).  On-camera in France, Karen has shot films in all kinds of locations throughout Europe, from many artsy little indie projects to big studio productions, working with icons like Gerard Depardieu, Jan Kounen, Polanski and Merchant & Ivory.  She also appeared in many of the popular French TV series at that time.

In American television, you might recognize Karen as the quirky 'Jolene Waite' on Weeds, the cut-throat lawyer in Silicon Valley, or in other shows such as Criminal Minds, Private Practice, Desperate Housewives, House, Gilmore Girls, Betas, Big Time Rush, The Young and the Restless, Monk, Big Love, Touch… And, you may have heard her as the recurring French woman’s voice on the walkie-talkie on the TV series Lost…

Karen has also been privileged to enjoy an extraordinarily rich career as a voice-over artist. She has worked in nearly every aspect of the entertainment industry: radio and TV commercials, animation, narration, documentaries, promos, audio books, celebrity voice-matching and voice replacement, internet media, video games, talking toys, dubbing, looping, ADR.  And because of so many iconic roles in cartoons and video games, Karen is invited to conventions around the world, as a guest of honour, to meet with fans, speak on panels & sign autographs.

Growing up a daughter to an architect father and a psychologist mother native from Denmark, Karen became passionate about the arts and the human psyche at a very young age.  Travelling often to Denmark and then to other countries, Karen also became fascinated by other cultures and humanity in general.

Karen went on to study psychology at Tufts University for two years, and then took her junior year abroad in Paris, with the goal of learning a new language and studying both psychology and theatre in another country.  During her course of studies there, she began an apprenticeship as a dialect coach for a studio in the heart of Paris that taught French actors to act in English for the camera, a skill that was becoming important for French actors, with so many productions coming to France to shoot from all over the world.  Her apprenticeship was so successful, that she was offered a full time job as a resident dialect coach at the studio the following year.  Karen spent the following years coaching actors from all over the world, both in the studio and on television and movie sets all over Europe, as well as coaching French celebrities privately for their movie roles in English.  Karen was soon offered roles herself to act in French movies and TV as well, and wanting to further her training and expertise in the field, auditioned, and was accepted into the prestigious Conservatoire National Superieur d’Art Dramatique in Paris.  This launched her career as an actress in France, where she spent the next fifteen years of her life acting in movies, television, hundreds of animated projects, video games and performing in plays all over France.

Karen’s coming of age in France offered her the opportunity to explore and study parts of the intangible world as well.  In her spare time, Karen took many spiritual seminars working with Gurus from India & shamans from South America.  Always in search of healing and healers, Karen searched for natural healing and natural healers in the fields of healing touch, energy healing, energy medicine, life coaching, massage, yoga, Tai chi, Qigong, meditation, acupressure, acupuncture & holistic medicine.  Her mindfulness of self, spiritual journey & personal development led her to transformational leaders & health care industry workers that are open to holistic medicine, including reiki healers and reiki practitioners.

There came a time when Karen decided to return to the United States to follow her passion for American Cinema and Television and relocated to Los Angeles, CA where she could pursue her career as an actress in the heart of the business.  As she was building as successful career for herself in Los Angeles, she also continued her studies and explorations.

Karen heard of Mahendra Kumar Trivedi and the Trivedi Effect in 2010 and the Biofield energy healing treatment in regards to emotional health, chronic pain, joint pain, muscle pain, severe migraines, low energy, fatigue, premenstrual syndrome & chronic fatigue syndrome. She became fascinated with his energy experiments in the fields of agriculture, livestock, biotechnology, microbiology, material science, genetics, cancer, human health, consciousness, autoimmune disorders, inflammation, fibromyalgia, arthritis, joint pain, muscle pain, and chronic pain. Having struggled with chronic migraines for many years, this research and the success rate of the Trivedi Effect, lead Karen to study with him.  Later that year she met Mahendra Kumar Trivedi of Trivedi Global, Inc.  Fascinated by the Trivedi Effect, she decided to study with Guruji and his team, Dahryn Trivedi, Gopal Nayak & Alice Branton so that she could learn to be a conduit of life energy and bring this energy to everything she does.  Although Karen doesn’t consider herself a professional healer, she believes that human beings have the capacity to bring transformative energy to anything they do, and each moment of everyday.

Mental well being, health & wellness have always been a focus for Karen in seeking relief of stress, uncertainty, worry, anxiety and past emotional trauma in her search for self compassion, empathy, calmness, happiness, affection, motivation and enthusiasm in her spiritual journey.  Working with the other seventeen members of her group including; Cathryn Dawn Nykvist, Celine Lavelle, Daniel Paul Przybylski, Dianne Heather Vincent, Dorothy Felger, Douglas Jay Konersman, Elizabeth Ann Feeney, Jay Anthony Prague, Joanne Lydia Starodub, Karen Rasdan, Leonid Soboleff, Maire Mayne, Mary M. Keesee, Padmanabha Narayana Pillai, Pamela Clarkson Ansley, Ronald David Schmitz & Sharyn Marie Sodomora, has allowed Karen distinct insight and understanding of the human biofield and its effect on human health & consciousness.  Time and time again, having seen the transformative effect of the Trivedi Effect energy everywhere in her professional life as an actress, as a coach for other actors, and in her personal life & relationships; since beginning to work with Trivedi Global, Inc., Karen has seen marked improvements in her physical health, emotional health, mental potency, her relationships & her finances.

Transformation, spiritualism & life purpose have always been goals as an artist, but Karen has found a calmness and indescribable peace on her journey and has seen her intuition, inspiration, self-esteem, love and eagerness for deeper relationships manifest in her daily love of life, finances, business ventures, relationships & the universal consciousness.