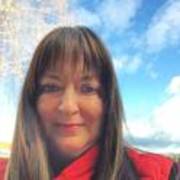 When I was a child, it was obvious to adult family members that I had intuitive abilities and compassion for others. Before the age of eight, I had a strong desire to know more and sought out people who I felt were spiritually inclined, albeit through church or at family gatherings. I wanted to know the how and why of things.

I also developed a strong sense of knowing how to work with the body at a young age. A family member had an accident that affected his physical body. At that time, the physical therapist taught me how to do a type of bodywork to improve his circulation and help with recovery. This was in the late 1960s, when I was around eleven years old, and marked the beginning of my experience in doing healing work using energy modalities-always expressing love and compassion through a healing touch.

Later on, in my young adulthood, two family members developed terminal pancreatic cancer. Through their journey and their crossing to the other side, I learned more about the power of love and God.

Growing up in Northern California, I have always been attracted to the plant world. We had lush green gardens in our neighborhood and lots of butterflies, bees and lizards, plus creeks and streams. There are also orchards and fruit trees, which we picked freely-cherries, peaches and apples. There was always a bountiful harvest and everything was shared.

So I had a lot of exposure to nature including the mountains, winter snow, the ocean and giant redwood trees. We did a lot of "catch and release" projects in elementary school-with butterflies and beetles and other creatures. I was always fascinated by how many legs and other parts they had-their colors and varieties. I spent my days as a child outdoors in nature most of the time, and with a lot of freedom.

I was formally trained in nursing care, specializing in obstetrics (OB) and general care in the late 1970s. I used this background to expand into the holistic health field-first to assist my own family, some of whom were challenging health issues and later to address specific health problems including Lyme disease and a compromised immune system.

Since then, I have had extensive training in the holistic health field and have an active practice in Ukiah, California as well as providing life coaching and energy modalities at a distance by phone.

In October 2011, I was coming back from training in Los Angeles, driving along on a mountain road, and I heard a monotone voice coming from the back seat of my car. I knew no one was back there, but I looked anyway. It said, "Pull your car over, and turn on the radio." I was going to be out of range soon and I would not be able to hear the radio, so I pulled over, turned on the radio and heard a woman being interviewed. She was talking about Mahendra Trivedi, who would be speaking about her work with biofield energy in an hour and a half and would be giving three of these sessions over a period of weeks. I've never heard this lady before, and I do not even know what station it was. (Later I did meet her in a workshop with Mr. Trivedi.) So I made it to another town, where there was good radio reception. The interview and the questions and answers were profound.

I got home just in time for the first biofield energy treatment with Mr. Trivedi. Prior to that, I was sad and depressed and did not even want to go home. After that transmission, I woke up with a sense of profound peace, calmness and happiness-to a degree I had never felt before. When I received the next two treatments, those sensations continued.

By 11/11/2011, I was invited to Mr. Trivedi and his new wife Dahryn's wedding reception in Los Angeles. There I learned more about the work, the science and the projects that Mr. Trivedi was involved with worldwide. He also introduced us to his first student in India, Gopal Nayak, on a live visual broadcast, and we were blessed to receive biofield energy healing from him as well. As a result, I felt parts of my brain expanding and healing.

After hearing about the science and what it could do for humanity through biofield energy treatments, with joy and passion in my heart, I felt this was important for me and decided to join Mr. Trivedi's Healing Mastery Program. I have been involved with this program ever since.

Since the training, I have noticed all kind of changes in myself and in others through this work-from the very subtle to the more profound. Following are just a few of the benefits. Anxiety has diminished or completely disappeared; More calmness; Chronic pain is gone; Higher consciousness and increased awareness; Deeper and closer relationships; Depression and emotional trauma overcome; Reversal of fatigue; No fear of the future; No feeling of hopelessness; Living in the present moment Increased financial benefits; Better overall health; Inflammation decreased; No more insomnia; A greater sense of life purpose; In the loneliness; Higher energy; Greater libido; Better mental well-being; More pleasure in life; Reduced restlessness, sadness and stress and spiritually feeling closer and more connected to God.

For those with chronic illnesses and conditions such as post-traumatic stress (PTSD), cancer and Lyme disease, I have seen reversals in these conditions.

In early years we got together as a group in workshops with Mr. Trivedi. Since his students live in different parts of the country and world, in these settings, we got to know each other, to talk and have meals together. Now we enjoy webinars and teleseminars taught by Mr. Trivedi with Alice Branton, CEO of Trivedi Global, Inc. as moderator.

In a project for the scientific community, I worked within a group of seven people in several experiments. We worked remotely-all at the same time, transmitting energy into a scientific laboratory-all from different parts of the world. The results were very successful. I felt a strong sense that I was fulfilling my destiny through this work. In addition to myself, my research group consisted of these six people: Barry Dean Wellborn, Deborah Lea Smith, Dezi Ann Koster, Elizabeth Patric, Jagdish Singh and Krista Joanne Callas. The results of one of our projects have already been accepted for publication.

My primary interest in the Trivedi work is not only in transmitting the energy through my healing arts but also in the environment that we need to sustain, protect and take care of the ocean, the soils, the agriculture. I have a strong interest in those areas and in the ecosystem itself. Drought is a very important factor. I was in Alaska this year and I did see the deterioration of the glaciers in the United States and Canada. It's real. Also, the wildlife species are definitely sending messages to us-the whales, the porpoises, the sea otters. They are all reflecting to us and speaking to us.

As you have noticed in the studies of Mahendra Trivedi, there has been a profound effect on agriculture-for instance, the cashew tree study. This energy had an innate ability to penetrate the soils and crops for the betterment of the product, in a very healthy way. With the advent of what this energy has done with humans and agriculture already, and what it can do for the soils, I believe there is no boundary for its effectiveness in all manner of applications.

The Trivedi Effect® has also been proven:

- Alter the size and mass of the atom, energy within and between atoms, and convert energy into mass and mass into energy.

- Increase the bioavailability and reduce the toxicity of pharmaceutical drugs.Conclusion

I am looking forward to what comes up in the science from the documentation now being accumulated. I see this as a progression in my process of self-healing and in assisting others, in a better and more effective way. From where I was five years ago to where I am today, I am more aware and more present in my own life. Certainly, the ripple effect has been a significant factor in helping my relationships with family and friends. When something disturbing happens, it does not stick. It feels 1,000 years behind me. The trauma seems to vanish. This is very beautiful. Before this effect, and before this spiritual growth, when I was traumatized, it stuck. Now, trauma is not in my thoughts; It just melts away. I do not need it any more. I am very grateful to God for the Trivedi Effect®.