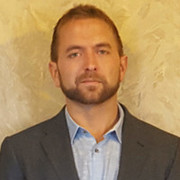 Matthew Hornung received his bachelor’s degree in Mechanical Engineering as well as degrees in Business and Industrial Engineering Manufacturing Processes from Kansas State University in 2007.  He serves as an engineer and top executive in an innovative agriculture company specialising in equipment to increase yield and efficiency of planting and harvesting multiple commodity crops. As a successful business owner and entrepreneur, Matthew has innovated many new products for agriculture that hold several patents.  He has the knowledge, means and wherewithal to take a concept from the creative design stage to the manufacturing, completion and effective sales stage of a successful product.

In 2010, Matthew was introduced to Guruji Mahendra Trivedi and the Trivedi Effect®.  Mr. Trivedi has the ability to harness Universal Energy in order to transmit a biofield energy treatment to living organisms and nonliving materials to beneficially alter its traits and characteristics.  This phenomenon of harnessing inherently intelligent universal energy and directing it to the intended recipient has been called the Trivedi Effect®.  Its impact has been tested, measured, documented and validated with the most sophisticated technologies available to modern science in over 4,000 experiments at numerous research institutes and universities across the globe. The Trivedi Effect® has the ability optimise the health, well-being and growth of the human condition as it has the proven power to transform the cellular structures of all living organisms. Even further, it has the incredible capacity to permanently alter the atomic, molecular and cellular structures of non-living materials to greatly enhance and alter the characteristics and behaviours of the treated specimen. The Trivedi Effect® has been documented in nearly 200 peer-reviewed science journals in the fields of agriculture and livestock, biotechnology, genetics, cancer, human health and materials science. These publications have been adopted by the National Institutes of Health, around 900 universities within the U.S., and hundreds of top universities around the world, including Harvard, Penn State, MIT, Yale, Princeton, Cornell, Columbia, Brown, Dartmouth, Oxford and Cambridge. This research constitutes an invaluable database for scientists attempting to understand the power of consciousness, energy medicine and the human biofield of energy.

Mahendra Trivedi’s work within the international scientific community is extensive and ongoing. Currently, he is collaborating with an international research organization to study the impact of the Trivedi Effect® on nutraceuticals for overall health, prebiotics, probiotics, antioxidants, anti-aging and in products that can potentially treat cancer, obesity and inflammation etc., and in pharmaceuticals in hopes of creating new, revolutionary products for the benefit of all humankind. Mr. Trivedi's mission is to utilise the Trivedi Effect® to usher in a new era that integrates scientific research with consciousness to vastly improve the human condition and benefit humanity on a global scale. The Trivedi Effect® is continuously being applied to a broad range of scientific fields to extend and transcend beyond the frontiers of the current scientific paradigm.

Mr. Hornung strives to be on the cutting edge of new scientific breakthroughs and was therefore naturally drawn to the Trivedi Effect® and this new frontier of science.  As a deeply spiritual but sceptical person, Matthew found the validation of what he felt was true by the immense scientific work conducted on Mr. Trivedi’s abilities. He has received a high degree of energy transmissions and guidance from Mr. Trivedi for over 6 years and has realised the immense benefits of this energy treatment. He has recognised the impact this universal energy has had on the success in business ventures and opportunities, health, prosperity, relationships and well-being. Matthew has reported the overall feeling of being in the flow and resonance with nature as well as a change in his perceptions and deeper spiritual growth.

With his agriculture background, Matthew has since conducted several experiments studying the effects of his ability to transmit a biofield energy treatment to benefit agriculture crops, livestock, animals and humans. Biofield energy experiments conducted on a variety of agriculture crops including corn, milo/sorghum, wheat, tomato, turmeric, moringa and medical marijuana have shown an observed difference in height, vigour and yield as compared to the control. Other blind study observations were made that could have a beneficial impact in wine production. Additionally, Matthew is interested in further studying the effects of this energy treatment as a replacement or supplement to traditional weed and pest suppression using herbicides, fungicide and pesticides. For instance, one such experiment conducted by Iowa State University titled “Biofield and Fungicide Seed Treatment Influences on Soybean Productivity, Seed Quality and Weed Community” found that Mahendra Trivedi’s application of a biofield treatment resulted in lower density of tall water hemp density, greater soybean stand density at R8 stage and greater seed pod-1 compared to the absence of seed fungicide. Matthew continues to study and conduct ongoing experiments in biofield energy treatments with a goal contributing to the enhancement of a sustainable and healthy future for agriculture and livestock production.

While there is much to be learned from the Trivedi Effect® and biofield energy treatments, it is apparent that this Universal Energy acts deliberately, intelligently, universally and is a fundamental basis for all living and nonliving forms or entities on this planet. Through scientific verification, a better understanding of the seemingly limitless capacity and wide reaching applications of this energy will have a lasting positive influence on humanity and the world.