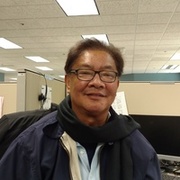 Rolando Piedad has worked in Information Technology for over 30 years as a systems and applications programmer, consultant, and currently a Security Administrator for the last 5 years for a non-profit health care organisation.

In my spare time, I had pursued various modalities of spiritual healing through Yoga, Tai Chi, and Moichi Okada Jorei; as influenced by his curiosity with Oriental medicine or healing.  In 2010, Rolando came across Guruji Mahendra Trivedi and was first introduced to the Trivedi Effect remotely through a live web cast. Rolando then met Guruji personally when he came to Los Angeles and received a personal energy healing. Rolando then decided to be an active participant for the Trivedi Effect Biofield Energy Healing and ultimately signed up for the first Monthly Enhancement Program, participated in all the weekend workshops since 2011 and ultimately signed up for the healers program.

Mr. Trivedi has the unique ability to harness the energy from the universe and transmit it to living organisms or nonliving materials anywhere in the world. The energy performs intelligently and beneficially to the recipient’s unique needs, optimising the recipient’s potential thus altering their behaviours and characteristics. This phenomenon is called the Trivedi Effect®.

Rolando was drawn to the Trivedi Effect’s ability to transform and elevate his own human experience, and the documented scientific experiments on the Trivedi Effect gave him confidence that this was the authentic means for transformation that he had been seeking. Rolando also experienced first-hand in conducting the same experiments with plants in his own garden or backyard with successfully rewarding results.

Rolando was impressed with Mr. Trivedi’s extensive 4,000 scientific studies in human health, cancer, microbiology, genetics, livestock, agriculture, biotechnology and materials science and over 250,000 testimonials on the Trivedi Effect®’s power to uplift every aspect of the human condition. After receiving his first Biofield Energy Healing Treatment/"Energy Transmission", Rolando felt rejuvenated and improved sleep as well as being more confident in his journey for Self Realization and spiritual discovery towards true Peace and Happiness.

Rolando also participated as one of the first candidates in a scientific research conducted to study the effectiveness of the Trivedi Effect.

As an active member of the Trivedi Family, Rolando has been an avid listener of other Trivedi Master Wellness programs participants as they testify and share their experiences with the Trivedi Effect and the energy behind the transformations. The reports have been described as “life-changing” and “Miraculous” with their claims that the energy transmissions have brought about relief from debilitating illnesses, diseases and disorders such as insomnia, fatigue and other physical disabilities. Others have reported improved immune systems and greater self-healing abilities. People also noted significant improvements in their emotional and mental wellbeing, as I too can testify. I feel greater calmness, happiness, compassion, Love, peace, empathy, inspiration, motivation, spiritual awareness, self-esteem and confidence, surrender and less judgmental and trusting of the divine energy in my healing improvements/advancements.

Mr. Trivedi has been unassuming nor endorses any religious affiliation, healing modalities and always recommends everyone to follow their own beliefs and inner guidance. By entering into higher levels of consciousness through the frequency of energy transmissions, I have experienced spiritual awareness more profound and heightened than what I have experienced in my past spiritual seeking.

Mr. Trivedi created an invaluable database on the power of consciousness and human potential, with over 4,000 scientific studies conducted on the Trivedi Effect® in agriculture,  livestock, biotechnology, microbiology, genetics, human health, cancer and materials science.  Furthermore, nearly 200 papers have been published in leading international previewed scientific journals documenting measured results of the Trivedi Effect®, thus excluding the possibility of the placebo effect.

Astounding results have led to collaborations with leading scientists such as Dr.  Rustom Roy, a materials scientist from Penn State University who was nominated for the Nobel Prize 23 times.

Through his corroboration with Guruji Mahendra Trivedi, Dr. Roy predicted that Mr. Trivedi’s science research would trigger the upstart of a new scientific paradigm of understanding. He had this to say about Mr. Trivedi and his abilities,“I see him as the completion of what India has brought to the world in modern scientific terms. Science is the religion of the world. It’s going to be very tough for the establishment to hold onto old ideas. I think with Mr. Trivedi's potential, he may become a pioneer in loosening the grasp of old science. I have no doubt Mr.Trivedi will change the face of science and human wellbeing in my lifetime.”

Although it seems clear that the Trivedi Effect® energy has some sort of inherent intelligence  that is capable of distinguishing and treating each recipient uniquely, a study conducted to  assess the Trivedi Effect® biofield energy treatments on a mixed sample of cancerous and  noncancerous cells at the California Pacific Medical Center Research Institute provides  undeniable support to this theory:

“The results suggest that the biofield treatment administered in the laboratory can induce cell death of brain cancer cells from a distance while at the same time promoting viability of normal brain cells. Such selective efficacy against cancer cells is the sought after ‘holy grail’ for novel  experimental antiXcancer agents and makes this work all the more exciting.”  XX Garrett L. Yount, Ph.D.

The Trivedi mission statement is to utilise the Trivedi Effect® to usher in a new era that integrates scientific research with consciousness to vastly improve the human condition and benefit humanity on a global scale. Currently, Ms. Branton and Mr. Trivedi are continuing their  investigation of the energy that powers the Trivedi Effect® via collaboration with an  international, multiXbillionXdollar research organization to study the impact of the Trivedi  Effect® on revolutionary pharmaceutical and nutraceutical products with great promise for the  treatment of immune disorders, inflammatory diseases, cancer and obesity; as well as for anti X  aging, antioxidants, probiotics, prebiotics and overall health for the betterment of the world.