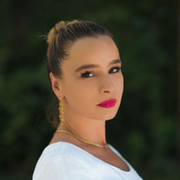 She is over specialized and has competency in Aesthetic Medicine, Endermology- Peeling, Mesotherapy, Skin Surgery, Skin Histopathology etc. She has worked as a doctor for 15 years and as aesthetic trainer and has produced a reputation for creating specialized treatments such as the Photoshop Like Treatment, Stretch - marks treatment and Acne scars treatment

She grew up in a family of medical doctors and has been fascinated since early childhood by Human Complexity and its impact in human health and individual responses to treatment. Since medical University she has kept special attention on Placebo effect, a-placebo effect and alternative medicine. During University and on she studied Aromatherapy, Acupuncture, Acupressure, Holistic Medicine, Reiki, Hands on Healing, Quantum Healing, Violet Flake, EFT, Yoga, Meditation, Tai Chi but she doesn't practice them.

In 2008 Dr. Rudina had a beautiful life event as well as a moment of inspiration that changed her life view for ever and she started looking for answers.

A few days later she was given a challenging existential question from her medical mentor of her Doctoral studies, Prof. Forsea regarding the progression of skin cancers and its relationship to an individual’s expectations and their immediate social and family environment. Her exploration of these questions and the desire to find an outcome led her to Trivedi Global Inc. and the Trivedi Effect® website.

She was introduced to Guruji Mahendra Kumar Trivedi from a highly respected friend and Teacher in November 2009. Rudina was amazed by the science in Cancer Cells, Autoimmune Disorders, Microbiology. From science, she knew these results were “impossible” but as a scientist herself they were impossible to ignore. She immediately decided to try The Trivedi Effect for herself remotely through an online webcast. The next day she realized she had the best sleep of her life. She woke up refreshed, looking amazingly rejuvenated, and her sever sciatic nerve pain had disappeared permanently.

In 2014 she had the great fortune to meet in person, Mahendra Trivedi, Dahryn Trivedi, and Gopal Nayak in India. she describes this meeting as Phenomenal, Lucky, and permanent life changing perception. As Living and perceiving the world as In a Van Gogh pictures. Kriptocrom protein perceptor in a " flie Fly" position was not just a revolutionary scientific article in Nature Magazine by Caltech Institute but a temporary lived reality.

She comes from a family of mix religion Muslyman Bektashi and Orthodox so she has learned since early childhood respect appreciation for all religions and celebrate all Sacred Days as a family culture. She also has studies books from Orthodox Catholic-Muslim Hinduism Best Asian Spiritualism Protestant Baptist Scientology, Buddism has high respect but does not practice one.

Mahendra Kumar Trivedi has the unique ability to harness the energy from the universe and transmit it to living organisms or nonliving materials anywhere in the world. The energy performs intelligently and beneficially to the recipient’s unique needs, optimizing the recipient’s potential at the cellular, molecular and atomic level, thus leading to lasting changes in their behaviors and characteristics. This unique phenomenon has become world renowned as the Trivedi Effect®.

Despite the increasing number of over 250,000 individuals who attest to beneficial results in physical health, sexual satisfaction, relationships, emotional health, mental potency, business ventures, finances and much more, Mr. Trivedi was aware of the possibility of the placebo effect. Thus, he sought to evaluate authenticity of the Trivedi Effect® through rigorous, scientific application. Mr. Trivedi created an invaluable database on the power of consciousness and human potential, with over 4,000 scientific studies conducted on the Trivedi Effect® in agriculture, livestock, biotechnology, microbiology, genetics, human health, cancer and materials science. Furthermore, nearly 200 papers have been published in leading international peer reviewed scientific journals documenting measured results of the Trivedi Effect®, thus excluding the possibility of the placebo effect. Astounding results have led to collaborations with leading scientists such as Dr.Rustom Roy, a materials scientist from Penn State University who was nominated for the Nobel Prize 23 times. Through his corroboration with Guruji Mahendra Trivedi, Dr. Roy predicted that Mr. Trivedi’s science research would trigger the upstart of a new scientific paradigm of understanding.He had this to say about Mr. Trivedi and his abilities, “I see him as the completion of what India has brought to the world in modern scientific terms. ... Science is the religion of the world. It’s going to be very tough for the establishment to hold onto old ideas. think with Mr. Trivedi's potential, he may become a pioneer in loosening the grasp of old science...have no doubt Mr. Trivedi will change the face of science and human well-being in my lifetime.” Mr. Trivedi and Ms. Branton have developed more than 100 Biofield Energy Healers throughout the world whose abilities have been scientifically tested, measured, documented and published in international, peer-reviewed science journals. This research shows promise for people suffering from autoimmune disorders like Addison’s disease, Alopecia, Autoimmune hepatitis, Celiac disease (gluten sensitivity), Crohn’s disease, Dermatitis, Endometriosis, Graves’disease, Guillain- Barre syndrome, Hashimoto’s thyroiditis, Interstitial cystitis (IC), Lupus, Lyme disease, Multiple sclerosis (MS), Psoriasis, Rheumatoid arthritis (RA),Type 1 diabetes, Ulcerative colitis (UC) and Vitiligo, as well as for inflammatory diseases like Allergies, Alzheimer’s, Asthma, Eczema, Pancreatitis, Acid Reflux, Heart Disease and high blood pressure.

Although it seems clear that the Trivedi Effect® energy has some sort of inherent intelligence that is capable of distinguishing and treating each recipient uniquely, a study conducted to assess the Trivedi Effect® biofield energy treatments on a mixed sample of cancerous and noncancerous cells at the California Pacific Medical Center Research Institute provides undeniable support to this theory: “The results suggest that the biofield treatment administered in the laboratory can induce cell death of brain cancer cells from a distance while at the same time promoting viability of normal brain cells. Such selective efficacy against cancer cells is the sought after ‘holy grail’ for novel experimental anti-cancer agents and makes this work all the more exciting.” Garrett L. Yount, Ph.D. The Trivedi mission statement is to utilize the Trivedi Effect® to usher in a new era that integrates scientific research with consciousness to vastly improve the human condition and benefit humanity on a global scale.Currently,Ms.Branton and Mr. Trivedi are continuing their investigation of the energy that powers the Trivedi Effect® via collaboration with an international,multi-billion-dollar research organization to study the impact of the Trivedi Effect®on revolutionary pharmaceutical and nutraceutical products with great promise for the treatment of immune disorders, inflammatory diseases, cancer and obesity; as well as for anti- aging, antioxidants, probiotics, prebiotics and overall health for the betterment of the world.

Now since 2009, Dr. Rudina Thanasi is associated with Mahendra Kumar Trivedi, Dahryn Trivedi, Alice Branton and Gopal Nayak. And she is in Healing Master Program since the beginning. She realized since the beginning that she also can harness Life Force for the benefit of others through Trivedi Effect even in distance, verified through scientific experiments published in American Scientific Journals.