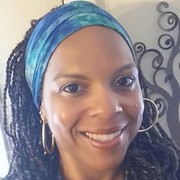 Sakina A Ansari received her B.S. of Psychology from Morgan St University in 1994. For as long as she could remember people always seemed to gravitate toward her. Family, friends and complete strangers felt comfortable sharing their inner most secrets and problems. She decided that to enhance this gift it would be beneficial to study the human mind and its functions, especially those affecting behaviour in a given context.

Ms Ansari is no stranger to research. While majoring in Psychology research courses were required. She later connected with a former college science professor and began to assist him in various research projects. Because of his strong encouragement, she took classes toward a Masters in Physics funded by a NASA grant. As his assistant, Sakina worked with both ex-ray and electron scanning microscopy. Ms. Ansari later became published and co-authored "Apollo 11 Lunar Samples: An Examination using Tapping Mode Atomic Force Microscopy and other Microscopic Methods" In the Journal of Scanning Microscopies and Atomic Force Microscopy/ Scanning Tunneling Microscopy vol 3 book.

An accident that occurred as a young adult was the pivotal event that began Sakina's journey to explore holistic medicine. For over 20 years Sakina has been involved in studying, participating and practising various natural healing modalities. Some of these complementary therapies are Reiki, healing touch, acupressure, massage, mindfulness, yoga, qi gong, energy medicine, tai chi, meditation, aromatherapy, acupuncture, nutrition, flower remedies, herbalism and homoeopathy. This has been the gateway to allow her to share her gift as a natural healer. Sakina is a certified aromatherapist and Reiki practitioner.

For many years Sakina pushed aside and dismissed many of her innate abilities. The passing of a loved one in 2005 was the catalyst for the emergence of her intuitive energy. Sakina A Ansari's desire to further develop and tap into other gifts led her to work with various energy healers and renowned transformational leaders. This marked the reconnection of her spiritual journey. Sakina knew that a true transformation has to allow a connection and opening of all our inherent gifts that would unlock and optimise the limitless human potential.

Trusting her intuition, in April 2011 she accepted an opportunity to be introduced to Mahendra Kumar Trivedi and the Trivedi Effect remotely via a live webcast.

In spite of the fact that she had never heard of Mr. Trivedi she decided to continue to trust her intuition and sign up for 3 blessings of transformation being offered. The next day Ms. Ansari felt a greater sense of peace, happiness and a renewal of life. These were feelings she had lost due to severe grief. Sakina looked forward to the subsequent Biofield energy healing treatments.

Mahendra Kumar Trivedi has the unique ability to harness the energy from the universe and transmit it to living organisms or nonliving materials anywhere in the world.The energy performs intelligently and is beneficial to the recipient’s unique needs, optimising the recipient’s potential at the atomic, cellular, and molecular level. Thus leading to lasting changes in their behaviours and characteristics. This unique phenomenon has become world renowned as the Trivedi Effect.

Sakina A Ansari love for research, personal development and natural healing medicine is what gravitated her to Mahendra Trivedi. She could see that the Trivedi Effect had the ability to raise her consciousness, transform her life and the people around her on many different levels.

Ms Ansari immediately signed up to become a part of the Healing master program at its inception in 2011. She felt this was the missing link that would elevate her transformation. With this knowledge she could learn how to utilise and harness the universal divine energy to assist a multitude of others.

Despite the increasing number of over 250,000 individuals who attest to beneficial results in physical health, relationships, emotional health, mental clarity, sexual satisfaction, business ventures, finances and much more. Mr. Trivedi was aware of the possibility of the placebo effect. Thus, he sought to evaluate authenticity of the Trivedi Effect® through rigorous, scientific application.

Mr. Trivedi created an invaluable database on the power of consciousness and human potential, with over 4,000 scientific studies conducted on the Trivedi Effect® in agriculture, livestock, biotechnology, microbiology, genetics, behaviorhuman health, cancer and materials science.

Furthermore, nearly 200 papers have been published in leading international peer reviewed scientific journals documenting measured results of the Trivedi Effect®, thus excluding the possibility of the placebo effect. These publications have been adopted by the National Institutes of Health, around 900 U.S. universities, and hundreds of top universities internationally.

Sakina appreciates that Mr Trivedi has no religious affiliation and does not endorse any healing modality. This allows the Trivedi Effect to be all inclusive to those who are looking for a deeper connection to their divine and transformation in any aspect of their life. He recommends everyone follow their own beliefs and inner guidance.

To stay connected and to continue to elevate her growth Sakina looks forward to meeting at least once a month to listen to the wisdom and discourse from Mr. Trivedi affectionately referred to in the community as Guruji. This is an opportunity to elevate our consciousness and connect deeper with our divine. This allows Sakina to get a deeper understanding, a chance to further develop and enhance her gifts. Sakina A Ansari understands the importance of one day workshops and live conferences. Since being a part of the Trivedi community she has not missed any that have been offered. Attending these workshops has afforded her to personally connect with the other Trivedi healing masters Alice Branton, Dahryn Trivedi, Gopal Nayak. Being a part of the workshops Sakina has developed a bond with other healers in the community and met various healers from around the world whose lives have been impacted by the Trivedi Effect.

The Trivedi mission statement is to utilise the Trivedi Effect® to usher in a new era that integrates scientific research with consciousness to vastly improve the human condition and benefit humanity on a global scale. Currently Ms. Ansari is proud to be connected along with all the healers associated with continuing the investigation of the energy that powers the Trivedi Effect® via collaboration with an international, multi billion dollar research organization to study the impact of the Trivedi Effect® on revolutionary pharmaceutical and nutraceutical products with great promise for the treatment of immune disorders, inflammatory diseases, cancer and obesity; as well as for anti-aging, antioxidants ,probiotics, prebiotics and overall health for the betterment of the world.

Sakina is happy and feels blessed that she continues to get the opportunity to live up to the meaning for her last name Ansari "one who helps".