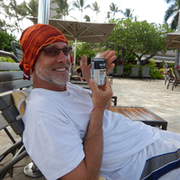 Steven Christie received his B.Sc. in Mechanical Engineering in 1983 and worked in the aerospace industry from 1983 until 1988. During that time, he became a certified Engineer in Training (EIT), nearly completed a certificate program in Artificial Intelligence at UCLA’s Computer Science Department, and earned his Master’s degree in Aerospace Engineering at USC. He then enabled himself to pursue his doctoral work full time by leaving industry and taking a position as a research and teaching assistant in this department at USC. He completed his PhD in 1993. From 1994 until 1999 he was a postdoctoral research associate at UCSB and Cornell. In 2000 he left science for the finance industry. He presently works in institutional asset management at a fund-of-hedge-funds firm.

Steve has always been a seeker for a deeper meaning and purpose in life, and he delved into philosophy, the sciences, and spirituality. Over the course of several years of this search for greater happiness and fulfilment, he moved more away from the pursuits of the mind and sought more for spiritual solutions. His personal suffering at various periods in his life was a significant driver of this search. Although at various earlier times in his life Steve considered himself an atheist and an agnostic, his prime drive now is to gain as deep a connection to the universal supreme love and intelligence commonly referred to as god. His goal is to achieve this relationship not within the context of a religious doctrine, but rather in a very personal and experiential manner.  He first participated in the Trivedi energy transmission programs in 2010 and is convinced that his involvement with them has helped him make great progress toward his goal. Because of his gratitude to Mahendra Trivedi for this, and his appreciation for the potential that exists in utilising scientific clinical studies to quantify the benefits of biofield energy, Steve is enthusiastically participating in the ongoing scientific investigations that Mr. Trivedi is carrying-out in collaboration with university and laboratory researchers.

In the course of his participation in the Trivedi meetings, workshops, and online webinars, Steve has learned with excitement about the positive results to-date of the effects of Trivedi biofield energy in the material sciences as well as various niches within the life sciences, including agriculture, livestock and various human health specialisations. Over 4000 scientific studies and close to 200 peer-reviewed publications in scientific journals now attest to the fact that the energy that Mr. Trivedi has the ability to direct can aid in human physical and emotional health disorders, increase the vitality and abundance of crop production, and even alter the atomic structure of inert materials.

These results are stunning and have the propensity to change the way that practitioners in medicine, psychology, farming, wellness, nutrition, and other industries view their professions. Mr. Trivedi has cultivated the ability in 3 of his colleagues Dahryn Trivedi, Alice Branton, and Gopal Nayak to also channel and direct this biofield energy very effectively. That, combined with the fact that he has enabled a number of us participating in his programs to harness the energy to a lesser degree, implies the possibility for a new expanding population of energy healers to now proliferate, with potentially great benefits for society on the whole.

Since he began working with his capacity for delivering this energy, hundreds of thousands of people have sought to receive this ‘Trivedi Effect’ from Mr. Trivedi. They have reported marked improvements in a host of their ailments including anxiety and anxiety disorders, panic attacks, insomnia, fibromyalgia, autoimmune disorders, joint & muscle pain, arthritis, low energy, fatigue, and chronic fatigue syndrome. Worry, fear, and stress have been relieved, along with more severe difficulties like obsessive-compulsive disorder, post-traumatic stress disorder, bipolar disorder, depression, manic depression, severe migraines, autism, and attention-deficit disorder.

Syndromes diminishing the quality-of-life such as low libido, impotency, low zest for life, work, and relationship issues have been substantially improved. These have been replacing by a more indestructible positivity, greater energy, less need for sleep, enhanced creativity, and imagination, as well as improved relationships and greater ease in all social interactions. Situations that used to be challenging such as the pressure of deadlines, public speaking, having to juggle multiple duties at once, and managing finances have become much more facile and unperturbing to many Trivedi participants.

These reports are by no means merely anecdotal. The published results of the controlled studies have been adopted by the National Institute of Health, approximately 900 U.S. universities, and hundreds of universities over the globe. Among these are Princeton, Colombia, Yale, the Massachusetts Institute of Technology, Dartmouth, Brown, Penn State, Harvard, Cornell, and Oxford. The scientists who have scrutinised the results of the carefully controlled clinical tests are often astounded and intensely intrigued. Dr. Rustom Roy, a renowned materials scientist at Penn State University who has been a Nobel nominee over 20 times, feels that Mr. Trivedi’s potential will break the scientific community’s existing doctrine of thinking. He said that “I have no doubt that Mr. Trivedi will change the face of science and human well-being in my lifetime.”

Besides healing ailments and disorders, the Trivedi Effect has brought many of its beneficiaries into greater depths of calmness, relaxation, happiness, fulfilment, and peace. Spontaneous and apparently-causeless experiences of greater love, compassion, and inspiration have been reported. There is a greater sense of one’s ‘belonging’ in the world (despite all its issues and difficulties) and a diminished need to have to ‘figure it out’. The sense that results is one of greater trust in life and innocence similar to what we all experienced as children. Intimacy and sexual function, as well as the appetite for sex, have all been increased.

Mr. Trivedi is not interested in being a guru or any established type of spiritual authority. He attributes all his abilities as gifts that have granted to him by the universal consciousness, and he recommends that everyone follow their own beliefs and guidance, whether or not they lie within any particular religious doctrine. What he is adamant about is that the energy that he has the ability to channel can give its recipients realise a deeper connection with the divine of their own understanding and lasting positive changes in their health and persona.

Since the time that he discovered that the supreme had gifted him with the ability to transfer this fascinating energy, he has always relied on its guidance regarding how he should use it, give it, and spread it. He considers himself an instrument of the divine who has been gifted to do its work on earth, and has emphasised to all of us that he has gifted us and that if we do not act similarly as humble servants of the divine, we will lose all the gifts we have received.

His sole interest is in results, particularly quantifiable results that will hold up under the highest level of scrutiny. This is why he has devoted so much of his assets and energy into generating a body of scientific testimony that will inarguably prove that there is a supreme loving source in this universe who can heal us physically, mentally, psychologically, and bring us into a level of wholeness and wellness that medicines, surgery, and therapies simply cannot. So he has focused more on demonstrating his ability to transfer energy into other living and nonliving things beneficially rather than espouse philosophy or teachings.

In his own strivings for spiritual realisation, Steve has practised various forms of meditation, various elements of yoga, prayer, and has gone on spiritual retreats to India on three occasions. During the past three years in which he has been receiving the energy of the Trivedi effect on a daily basis, he has noticed significant changes in his life. These include greater ease with people and better relationships, approximately a 40% decrease in the number of hours of sleep he needs to feel rested, much fewer illnesses, more energy yet with greater calm, and more creativity and intuition. He has found that he accomplishes more in each day now with less planning, and that the process of accomplishment is now a natural flow more than one of forced effort. Although he has not yet had the experience of directly ‘talking’ with his divine, he is noticing that prayers and intentions are being increasingly fulfilled and that, along with the guided ‘flow’ in his life now, that he has greater self-awareness which allows him to ‘catch’ when his ego and mind try to come up with excuses, delusions, and other things which keep us humans separated from our purest deepest nature. Steve is sure that god is guiding him this way in his journey to reach him. Steve is no longer preoccupied with his own problems like he used to be. Now his focus is on purifying to become the greatest he can be so he can understand and fulfil god’s destiny for him in this life to the greatest extent that he can.