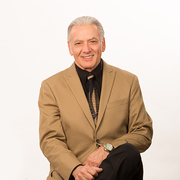 Thomas Slade has worked within the nutraceutical industry for the past 34 years. He has extensive knowledge and experience in all related sectors including retail, wholesale, research and the formulation of products sold nationwide. In addition to owning and managing multiple locations in two states for 33 years, Thomas was exposed to many natural healing modalities during this time ranging from Biofield Energy machines, nutrition, Integrative Holistic medicine, herbology, bodywork techniques, mindset coaching, acupuncture, energy healing such as Reiki, Qi Gong and Healing Touch as well as other alternative and complementary avenues in healing. He used kinesiology testing in helping others find the right supplements. While he was aware of having an ability to feel energy he never found the right understanding guiding him to further cultivate this gift.

In March 2010 Thomas researched Guruji Mahendra Kumar Trivedi with his scientifically proven ability to transmit energy to all forms of life as well as manmade and natural materials anywhere in the world. Mr. Trivedi’s ability to transmit energy from the universe intelligently to any subject matter and have it become beneficial is well documented in 4000 extensive scientific studies from human health, cancer, microbiology, genetics, bio-technology, material science, agriculture, and livestock. This is known as the Trivedi Effect®.

Mr. Trivedi has almost 200 scientific studies published in leading international peer-reviewed journals attesting to the power of the consciousness mind. His abilities have allowed him to successfully transform structure to living, natural and manmade materials, documenting measured results of the Trivedi Effect®.

Many reports from those who have received the transmissions of the Trivedi Effect® have described them as “life-changing” and “miraculous”, claiming relief from sleep disorders, chronic pain, sexual dysfunction such as low libido, impotency and erectile dysfunction (ED), premenstrual syndrome (PMS), migraine headaches, fibromyalgia, arthritis, chronic fatigue syndrome (CFS), irritable bowel syndrome (IBS) and more. Still others with debilitating illnesses insist the Trivedi Effect® Transmissions have improved their immune systems with greater self-healing abilities, including those suffering from cancer and those who have received chemotherapy and radiation treatments. Parents with children of Autism Spectrum Disorders have observed visible and dramatic shifts in their children’s mood, social interaction, awareness, environmental integration, behavior, mental and emotional wellbeing.

Others have reported they have discovered their life’s purpose, met their soulmate, feel more connected to Nature, Spirit and knowing their own soul in this lifetime. They have noted significant improvements in their emotional and mental wellbeing, including bipolar disorders, obsessive compulsive disorder (OCD), sadness, fear, anxiety, panic, post-traumatic stress disorder (PTSD), attention deficit disorder (ADD), attention deficit hyperactive disorder (ADHD), separation, hopelessness, worthlessness and many other areas of emotional disharmony and psychological disorder.

Mr. Trivedi is aware of the possibility of the placebo effect and he has sought authenticity through rigorous scientific application thus minimizing and excluding the possibility of the placebo effect in all areas of study creating an invaluable database of 4000 scientific studies on the power of consciousness and human potential with the Trivedi Effect®.

These amazing results have led to collaborations with leading scientists such as Dr. Rustom Roy, a materials scientist from Penn State University who was nominated for the Nobel Prize 23 times. After studying the effects of Guruji Mahendra Trivedi and his transmissions, Dr. Roy predicted that Mr. Trivedi would trigger the upstart of a new scientific paradigm of understanding in scientific research. Dr. Roy is quoted in saying this about Mr. Trivedi’s abilities, “I see him as the completion of what India has brought to the world in modern scientific terms…Science is the religion of the world. It’s going to be very tough for the establishment to hold onto old ideas. I think with Mr. Trivedi’s potential, he may become a pioneer in loosening the grasp of old science…I have no doubt Mr. Trivedi will change the face of science and human well-being in my lifetime.”

Guruji Mahendra Trivedi and the published studies on the Trivedi Effect® have been adopted by the National Institutes of Health, over 900 universities within the U.S. and hundreds of more internationally including Oxford, Cambridge, Princeton, Harvard, Yale, Columbia, Brown, Dartmouth, Cornell and Penn State.

In June of 2010 Thomas received his first 3 remote Biofield Energy transmissions from Guruji Mahendra Trivedi. During this event he began to experience energy in a profound way as he finally started to understand the possible potential of his ability. Thomas started the Trivedi Master Healer Program in September 2010 and has become a Trivedi Effect® Biofield Energy Healer scientifically tested, measured, documented and published in international peerreviewed science journals.

A recent study involving groups within the Trivedi organization were tested for their ability to transmit energy of the Trivedi Effect® remotely to a laboratory in India. The results were positive and published, the members within Group 7 are: