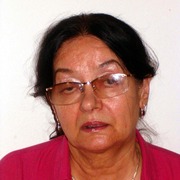 Veturia Chiroiu (born in 1942) received a PhD in Mathematics from the University of Bucharest in 1981. Since 1966 she has been working as asenior research fellow at the Institute of Solid Mechanics of the Romanian Academy. Now, she is the head of Department of Deformable Media and Ultrasonics. She received a Fulbright Fellowship to work at Princeton University, Department of Aerospace and Mechanical Science (1972–1973), has led various research projects (Copernicus, NATO, FP7), and lectured in foreign institutes and universities. Her research activity has involved issues related to nonlinear elasto-dynamics, nanomechanics, biomechanics, inverse problems and intelligent structures and materials. She has approximately 140 publications and holds one patent. She is the winner of the prize Aurel Vlaicu of the Romanian Academy in 1997. Since 2000 she has been a PhD advisor in the field of mechanical engineering at the Romanian Academy. Since 2004 she has been an Honorific Member of the Technical Sciences Academy of Romania (ASTR). We mention the monographs Optimum design 1981, Inverse problems in mechanics 2003; Advanced mechanics on shells and intelligent structures 2004, Introduction to Nanomechanics 2005, Dynamical Systems. Theory and Applications 2007, 2011, Publishing House of the Romanian Academy.